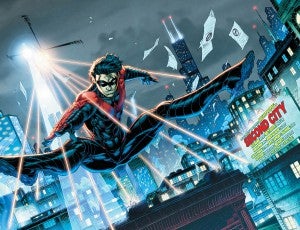 Warning: mild spoilers ahead for today's issue of Nightwing, which just went on sale through the Barnes & Noble Nook Bookstore and will be in comic shops in a few hours.

Today, Nightwing moves to Chicago. It's a strong issue, beautifully illustrated by Brett Booth and Norm Rapmund, and one of the most eye-catching aspects of the story is the opening sequence, in which Nightwing stalks the rooftops of Chicago, running from the police.

New town, suddenly he doesn't have the law on his side. Typical superhero problem. 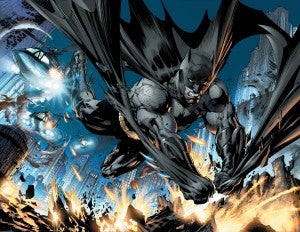 Typical superhero solution, apparently, too. The bounding, the masked, storm trooper-looking police, the chopper...it's all virtually beat for beat what Batman was going through "five years ago" in Justice League #1, the title that launched the New 52.

It's a very cool homage, and fun to pull out the issues and look at the sequences side-by-side. The similarities are unmistakable and obviously intentional, as writer Kyle Higgins pays homage to the title that launched a new era of the DC Universe in the issue that is set to launch a new era for Nightwing, coming (again) out from under the Shadow of the Bat to be his own man in a new city.

Booth conveys a fluidity of motion with Dick Grayson that Jim Lee's Batman never really had. Like Frank Miller's Batman, Lee's always seems to be just a bit too square for his surroundings, giving the impression that he has to bend the world to his will and charge through things. Here, Dick is true to his circus-performer roots. He's lithe and resilient, even when taking a shot.