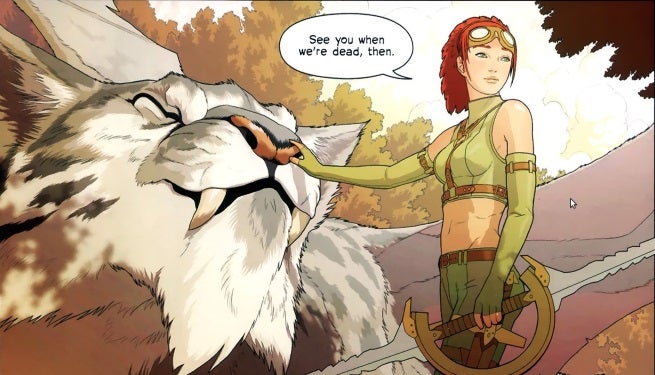 Nate Simpson has revealed on Twitter that he has completed Nonplayer #2.

Nonplayer #1 was released in April 2011, the first issue of a 6-issue miniseries. The series tells the story of Dana Stevens, a young woman living in the near future who spends time in the fully-immersive online game Warriors of Jarvath, which allows her to leave her life as a delivery girl and become a master assassin. However, things start to get weird when Dana accidently kills the NPC queen in the game world, eliciting a disturbingly real response from the king.

Nonplayer #1 received widespread acclaim, thanks to Simpson's stunning art and engrossing story, which was inspired by his work as a video game concept artist. Nonplayer was even picked up for a film adaptation by Warner Bros.

Unfortunately, a bicycle accident that left Simpson's drawing hand in a sling put the series on hiatus. After recovery, Simpson returned to work on the project, but the progress has been slow as Simpson has juggled both work and fatherhood.

If you're a member of the comics press and I promised you any kind of exclusive upon the occasion of Nonplayer 2's release, could you DM me?

Which is a roundabout way of saying Nonplayer 2 is DONE. Woohoo! I'm going to sleep in till 6am for a WHOLE WEEK in celebration! #HOVD

However, it seems that Nonplayer #2 is finally complete. No release date has been named as of yet, but hopefully one is coming soon from publisher Image Comics.

Nonplayer #2 Has Been Completed