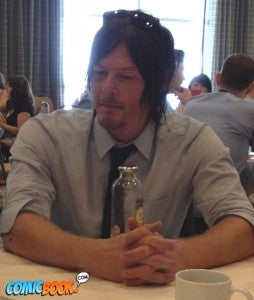 Norman Reedus plays Daryl Dixon on AMC's hit series The Walking Dead, based on the comic book by Robert Kirkman. In addition to appearing on The Walking Dead, Norman Reedus has also appeared in a number of films, including The Boondock Saints I & II, Hello Herman, and Sunlight Jr. Norman Reedus was also the voice of The Punisher in the recently released animated feature Iron Man: Rise Of The Technovore.

Back in July, AMC released the first official trailer for Season 4 of The Walking Dead, which raised a lot of questions about what might be in store for the upcoming season. Comicbook.com connected with Norman Reedus recently for an exclusive interview on The Walking Dead, The Boondock Saints, and comic book movies.

Comicbook.com: A lot of fans have been clamoring to see Daryl Dixon appear in The Walking Dead comic book series, but Robert Kirkman has said that he likes to keep certain characters unique to certain mediums. What are your thoughts? Would you like to see Daryl in the comics? Or do you prefer him as a TV only character?

Norman Reedus: Of course I would love to be a part of the books and I’ve joked around with Robert [Kirkman] begging him to put me in, but he’s the creator and really knows what’s best for the stories. They are so intricate and vast I can’t even wrap my head around what that’s about really, to create such a unique world like that, so I’m following his lead. I’m really happy with where I’m at if you know what I mean.

Comicbook.com: Do you read The Walking Dead comic book series?

Norman Reedus: I didn’t before I got the role then I jumped in right away once I was part of the show. I think it’s all pretty magical.

Comicbook.com: At a recent press event, Robert Kirkman told us that your fans might actually wind up getting Daryl killed, because he took the message of “if Daryl dies, we riot” as somewhat of a dare. How would you respond back to Kirkman?

Norman Reedus: I would be very bummed. I think it’s silly to think any one of these characters on the show are invincible, it’s a dangerous world and Daryl has a lot to discover as do all the players.

Comicbook.com: If The Walking Dead writers and producers do ever decide that Daryl’s time is up, then how would you like to see Daryl go out on the series?

Norman Reedus: What’s with all these death questions? Maybe, I can be found by a harem of sirens that can sing to me and pet my head. I could become their sex slave and populate mermaid land with redneck fish people.

Comicbook.com: In The Walking Dead Season 4 preview trailer, there is a scene where it appears as if Beth might be a little taken with Daryl. Can you tell us if Beth might be developing a little bit of a crush on Daryl in Season 4?

Norman Reedus: I can’t tell you that, but god she’s cute so fingers crossed.

Comicbook.com: In The Walking Dead Season 4 previews, there appear to be a lot more walkers around the prison. Would Daryl ever consider forsaking his crossbow for an automatic weapon that would be more effective against a large group of walkers?

Norman Reedus: Daryl has used guns before so that wouldn’t be hard to imagine.

Norman Reedus: I can’t really answer that one either. You'll have to watch.

Comicbook.com: You’ve mentioned having an interest in directing in the past. Have you had any discussions with Scott M. Gimple about possible directing an episode? Maybe one where Daryl isn’t featured quite as much so you wouldn’t have to pull double duty as and actor and director.

Norman Reedus: I can’t even wrap my head around directing one of these episodes. I’ve directed only short films and the idea of handling one of these scripts would make my brain explode. I seriously don’t know how our directors do it, it’s truly impressive.

Comicbook.com: With you already being on the highest-rated show on television, do you see the next step in your career being more in feature films?

Norman Reedus: I started out doing features. I’ve been in quite a few, I’m happy at the moment playing this part and my first priority is this 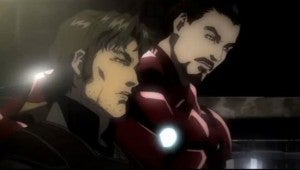 Comicbook.com: In Iron Man: Rise of Technovore, you were the voice of The Punisher. Are there any more upcoming animated features that you are doing voice work for?

Norman Reedus: That was a lot of fun. I really enjoyed it. I did it in between episodes so I’m sorry if The Punisher had a little southern twang. But I think it came out really well. Super fun.

Comicbook.com: With comic book movies being all the rage and your voice work with The Punisher, are there any comic book characters that you would like to play in a live action movie? Either on the superhero or the villain side?

Norman Reedus: Oh man, I would love that one day. I want some super powers. Blow fire out my eyeballs or something.

Comicbook.com: The last we heard about Boondock Saints III is that a script was being written. Have you seen a script yet? If you like the script, do you plan to sign on to return for a third movie?

Norman Reedus: I haven’t read the third one yet. I’ve only heard the same rumors you have just from different sources. Never say never.