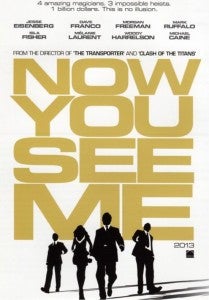 The upcoming movie Now You See Me from Summit Entertainment has a very impressive cast, but it’s not just the cast that is making us describe the movie as looking a little bit like The Dark Knight Rises meets The Social Network. The movie trailer gives the mysterious vibe of The Dark Knight Rises, while also mixing in the hipness of The Social Network.

About the cast, it features Dark Knight Rises stars Morgan Freeman and Michael Caine, Social Network star Jesse Eisenberg, Avengers star Mark Ruffalo, Hunger Games star Woody Harrelson, and more. And yet another connection for comic book fans, the director is Louis Letterier, who directed Incredible Hulk. So in an interesting twist the director behind the old Edward Norton Hulk is now directing the new Mark Ruffalo Hulk in a non-Hulk movie. The two should have had a lot of interesting chatter on the set, since Letterier had spoken out against the Hulk casting change to MTV.

Hulk controversy aside, Letterier looks to have put together a very interesting movie. Now You See Me is scheduled to be released in movie theaters on June 7, 2013.

Here’s the official description of the movie. “The Four Horsemen, a magic super-group led by the charismatic ATLAS (Jesse Eisenberg), perform a pair of high-tech magic shows, first astonishing audiences by robbing a bank on another continent, and then exposing a white-collar criminal and funneling his millions into the audience members’ bank accounts.

FBI Special Agent DYLAN (Mark Ruffalo) is determined to make the magicians pay for their crimes—and to stop them before they pull off what promises to be an even more audacious heist. But he’s forced to partner with ALMA (Melanie Laurent), an Interpol detective about whom he is instantly suspicious. Out of desperation he turns to THADDEUS (Morgan Freeman), a famed magic debunker, who claims the bank heist was accomplished using disguises and video trickery. One thing Dylan and Alma agree on is that the Horsemen must have an outside point person, and that finding him (or her) is key to ending the magicians’ crime spree. Could it be Thaddeus? Or Alma? Or could it really be…magic?

As pressure mounts and the world awaits the Horsemen’s spectacular final trick, Dylan and Alma race to find an answer. But it soon becomes painfully clear that staying one step ahead of these masters of illusion is beyond the skills of any one man—or woman.”

Now You See Me Trailer: The Dark Knight Rises Meets The Social Network