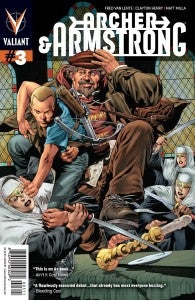 Whew! New York Comic Con really did throw a monkey wrench in these commentary tracks, but as of now we're back on track. We would have liked to have caught up with Fred Van Lente at New York Comic Con to have a conversation about the book in person, but whenever someone so devastatingly handsome hits a city with as many people in it as New York, his time tends to be in great demand. Maybe we'll catch up with him the next time he's in Syracuse, where we're already bundled up in heavy coats, hats and mufflers and have been basically since September 1. Ah, Upstate New York! In any event, you probably want to hear about Archer & Armstrong...! Do you write the recap page? It's a kind of perfect mix of the dry and the surreal. I do not. That's our terrific assistant editor, Josh Johns. He has a great (read: "funny") name for the collection I'll tell you about next time. I try to give him as much help as I can, though, as we have a fairly involved plot at this point! 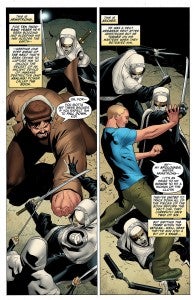 Did you know Lilith (the figure from Jewish myth) is actually a key figure in another comic right now? Nope. Which one? She was also the main bad guy in Valiant's own Trinity Angels, created by Kevin Maguire. (And the 1990s Ghost Rider, come to think of it.) The Lilith myth has always fascinated me because it makes so much more sense than the Eve thing. Made out of a rib? Lame. Lilith is awesome and it's shame she's so often depicted as a bad gal. In fact, also germane to this issue, she's depicting on the ceiling of the Sistine Chapel by Michelangelo tempting Adam and Eve with the apple -- click here to view. Clayton based his depiction of Lilith here on that. When did "Nunjas" occur to you? Genius! Another Valiant editor, Jody LeHeup, came up with that brain nugget when we were devising the solicitation for this issue. A whole great team makes this comic what it is, and I'm glad to give each and every one credit. 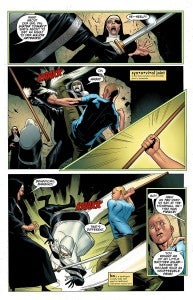 When will we see Armstrong drink wine that Jesus made from water? Or is that too much? In the original pitch for the series, Armstrong accidentally created all the major religions. He's Vishnu, he told Moses what to write on the Ten Commandments, he talked to Mohammed in the cave, he tempted Jesus during his time in the wasteland. I'm not sure even this book can take that level of blasphemy, though. I still can't shake how well-suited Clayton Henry's work is for the well-scrubbed members of the cult. Have you seen his Eternal Warrior pages yet? I can't wait to see how well it'll translate to a character who has a bit more brutality and sloppiness about him. Clayton will be taking a break next arc (beginning on #5) to work on a very exciting Archer & Armstrong-related project, but his able replacement is Ms. Emanuela Lupacchino, formerly of X-Factor and Castle, whom I had the pleasure of meeting at NYCC. She's from Rome and is ironically coming onto the book after the action leaves Rome. Valiant's posted some of her Eternal Warrior pages around on the web -- check 'em out, they're great. It really didn't take long for Mary-Maria to show up. Why does she get a sexy outfit and Archer doesn't? He would've looked a little suspicious wearing it on the bus in #1. 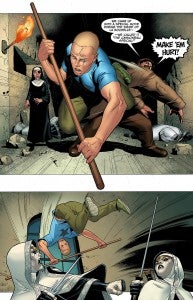 The Thuggee? So Archer's cult are after the Sankara stones? Should I re-watch the Indiana Jones movies? You keep making comparisons to them and it's been a while. Do you know what Tommy's last words to Archer were? Sure. You do too. Archer said them on the next to last story page. Was it "I hated Lost in Translation?" I'd be with her there. My favorite Sofia Coppola is Marie Antoinette. Is there something inherently awesome or hilarious about using Nazi villains in the "wrong" context? It's like Nazis, robots and gorillas are just comic book villain gold. I agree. The same with the Hitler mustaches. In this instance, of course, the Nazi obsession with Tibet is well-documented -- click here. I started out writing for role playing games, for the Call of Cthulhu game specifically. My first published book was The New Orleans Sourcebook -- I'd link to it but they never paid me for it, and I just discovered they brought out a second edition, so f--k them -- and the sequel I was working on before they shut the company down (permanently, or so I thought at the time) was an occult World War II sourcebook. So I'm definitely tapping that old research for Archer & Armstrong ... definitely seems apropos, no?

Riverdale Season 5 Is Now on Netflix

Xbox Fans Furious at Scalpers Over Mini Fridge Sell Out