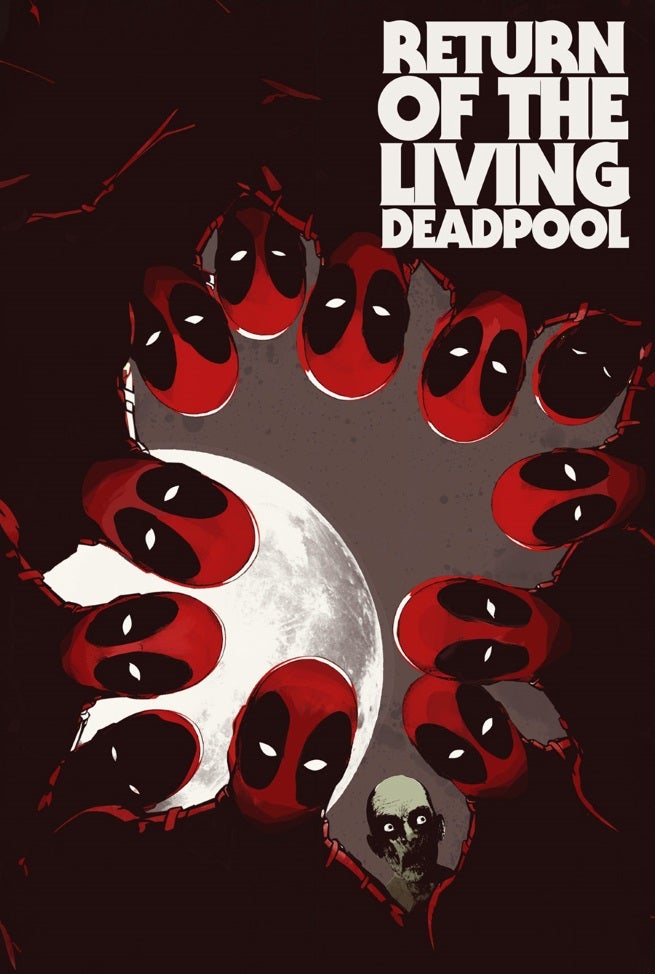 Night of the Living Deadpool saw Deadpool dealing with a zombie apocalypse, and “saving the world” by turning all of those zombies into Deadpools, sharing in one Deadpool consciousness.

Problem solved, right? Well, not quite.

At the end of Night of the Living Deadpool, Deadpool has found a way to turn zombies into more Deadpools. That sounds like a pretty perfect fairy tale ending to me. What could possibly go wrong?

What indeed? The answer, of course, is everything!

The law of unintended consequences has teeth in this story. In NIGHT OF THE LIVING DEADPOOL, our hero thought he was doing the right thing. He gave his life... kinda... to make sure that every zombie that bit him became part of something bigger. Every Deadpool-biting zombie became Deadpool, and more and more Deadpools started to appear.

As this story opens, though, a little bit of time has passed, and we realize that the plight of humanity has only just begun.

When I'm working on a series like this, my mind is always turning over new avenues for storytelling. I love sequels, because I can take something I've written and turn it on its ear and really surprise the reader. For whatever reason, though, I didn't bring up a possible sequel to my editor, Jordan D. White. After the series had wrapped, I did an interview and mentioned that I'd love to return to the world from NIGHT OF THE LIVING DEADPOOL. Jordan read the interview and called me up, asking "Why didn't you tell me you had a sequel in mind?"

What is it about Deadpool and the zombie genre that make them go together so well? Is it Wade’s zombie-ish regenerative abilities? His moral grey? Or something else entirely?

I think the story works so well because Deadpool and zombies shouldn't go together. The two concepts are drastically different (at least if you're playing the zombies scary) so finding a way to make them work together can open up some very interesting avenues for storytelling.

Have you ever had the desire, or the opportunity, to write Deadpool in a less apocalyptic scenario? Is that something you’d like to do in the future, or is there just something about Deadpool as the last hero on Earth that you find especially appealing?

Well, I've written plenty of non-apocalyptic Deadpool. DEADPOOL KILLS THE MARVEL UNIVERSE is a little Armageddon-ish, I suppose, but not quite. DEADPOOL KILLUSTRATED. DEADPOOL KILLS DEADPOOL. DEADPOOL VS. CARNAGE. And I've done a few one off stories and short stories that weren't apocalyptic.

So, yeah. I'm thrilled to write Deadpool in any and all scenarios. He's a terrific character. So much fun to write!

You have a different artist on Return than you did on Night, Nik Virella. How is the change in artist going to effect the tone of your story? What does she bring the Return of that’s different than what Ramon Rosanas brought to Night of? Do you find yourself scripting the issues differently in order to play to her unique strengths and style, and how so?

Nik is a really wonderful artist, and she brings her own flair to the book. It's a different visual tone that what Ramon did with the book, but it works because the story has a different tone all the way around.

As for scripting, I don't usually change my style for a particular artist. In this case, I was writing the first issue before I found out who would be drawing it.

I'll admit, I was nervous at first, because Ramon's work on the first series was so awesome. But I lucked out, because Nik’s work on this story is absolutely fantastic!

NYCC: Cullen Bunn Talks How Everything Goes Wrong In Return Of The Living Deadpool