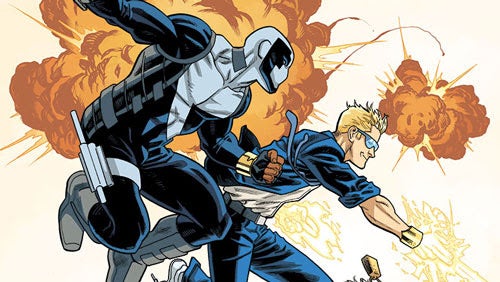 Today at their panel at New York Comic Con, Valiant Entertainent announced that writer James Asmus and artist Steve Lieber will tackle Quantum and Woody Must Die, identified by the company’s Hunter Gorinson as the first in a series of miniseries to feature the characters.

It seems likely, though wasn’t explicitly stated, that the ongoing series is officially over. Next Wednesday sees the launch of Q2: The Return of Quantum and Woody by Priest and M.D. Bright, the characters’ creators.

You can see the official solicitation text below.

As revealed today at New York Comic Con 2014, Valiant is proud to announce QUANTUM AND WOODY MUST DIE! #1 (of 4) – the FIRST ISSUE of a dastardly new limited series jumping-on point for the most nominated series of the 2014 Harvey Awards! The first in a new series of limited series for the world's worst superhero team, start reading here as award-winning writer James Asmus (Gambit,Thief of Thieves) and Eisner Award-winning artist Steve Lieber (Superior Foes of Spider-Man) bring the most talked-about duo of semi-professional heroes in comics to a whole new high! (Unfortunately, there are a bunch of people that would like to kill them up there.)