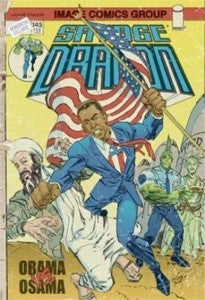 With the historic announcement made tonight by President Barack Obama about the killing of Osama Bin Laden, we wondered how we could best report on it from a comic book perspective. Both President Barack Obama and Osama Bin Laden have been drawn in a number of different comic books in the past. However, we think this Wondercon comic book convention variant cover of Savage Dragon #145 sums things up best. 'Nuff said.