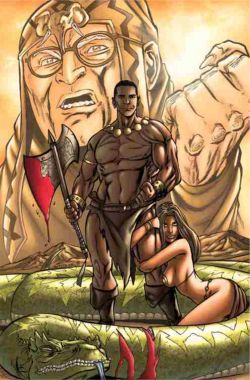 President Obama has seen a lot of action in the realm of comic books lately. From being endorsed by Savage Dragon, to being saved from the Chameleon by Spider-Man, to activating a new unit of the Youngblood team, the 44th President of the United States has been a very busy man. Now, President Obama will appear in yet another pair of comic books. Obama first will be featured in a new series titled Barack the Barbarian: Quest For the Treasureof the Stimuli. A cross between the 2008 election and Conan the Barbarian, this series, published by Chicago based Devil's Due Publishing, features the title character as he protects the villagers of Hope Kingdom. Barack the Barbarian is aided in his quest by the sorceress Hilaria and her Loki-like husband Biil. Barack searches for the elusive treasures while fighting a slew of foes based on many heroes of the Republican Party, including the overlord Booosh, Chain-knee, and a bikini-clad ice vixen that looks an awful lot like a certain governor from Alaska. But don't think for a minute that Barack the Barbarian is meant to mock the president. In fact, Devil's Due founder and President Josh Blaylock is an avid supporter of Obama. Blaylock told the Chicago Tribune that " the company took inspiration from a half-dozen other Obama comics, including the president's appearance earlier this year with Spider-Man, as well as from the president's own fondness for collecting 'Conan the Barbarian' comics." GI Joe's legendary scribe Larry Hama writes Treasure for the Stimuli. The series will retail for $3.50. The second take on President Obama by Devil's Due is a one-shot called Drafted: One Hundred Days. In Drafted, a war torn America, devastated by alien invaders, turns to a certain senator from Illinois to lead a band of freedom fighters from Chicago to turn the tide. The only problem: thanks to injuries sustained from the war, Obama is rendered mute. Written by Mark Powers, with art by Caravan Studio, Drafted will retail for $5.99. Both series are expected to hit stores in June.