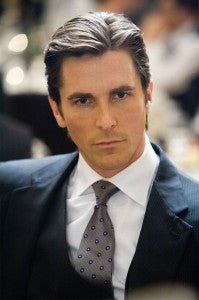 It’s been a long running joke that billionaire playboy Bruce Wayne a.k.a. Batman is part of the 1%. Back when rumors first surfaced that The Dark Knight Rises might use the Occupy Wall Street protesters in scenes in the film, many pointed out that in real life Bruce Wayne would be among the wealthiest people in the United States. Now, thanks to a new trailer for The Dark Knight Rises, Bruce Wayne is once again getting called out as part of the 1%.

In the new Dark Knight Rises trailer, which is airing in theaters in front of Sherlock Holmes: A Game of Shadows, there are several scenes that point to a revolt against the rich. The trailer starts out by showing Gotham as a shining city, and the observation is even made that the mayor is going to dump Commissioner Gordon because no one needs a war hero in peace time.

In one scene, Selina Kyle a.k.a. Catwoman whispers into Bruce Wayne’s ear, “You think this will last? There's a storm coming Mr. Wayne. You and your friends better batten down the hatches, because when it hits you're all going to wonder how you ever thought you could live so large and leave so little for the rest of us.”

While Selina Kyle is talking to Bruce Wayne, the scene flashes to what appears to be an angry mob ransacking homes of the wealthy. Luxury items are being hurled over staircases, and a rich old man appears to be trying to hide under a dresser, before being dragged out by a mob. 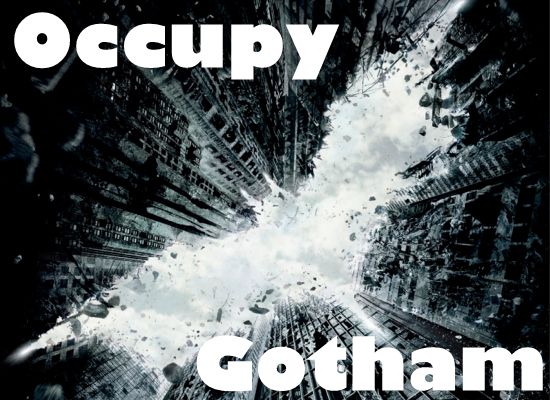 After Selina Kyle makes her comment, Bruce Wayne has the look of someone who has come to the sudden realization of how he is viewed by the less fortunate. The trailer has sparked the surge of the #OccupyGotham hashtag on Twitter, inspiring tweets such as this one from Doug Benson, “In the DARK KNIGHT RISES trailer, Catwoman pretty much calls out Bruce Wayne for being in the 1%.”

After seeing the trailer, Comicbook.com speculated that something similar to the occupy movement could be a plot element of The Dark Knight Rises. While Batman always defends the weak and downtrodden, Bruce Wayne is purposefully a high-living playboy. For example, in this scene from Batman: Year One, Bruce Wayne plays it over-the-top as part of keeping his identity secret. Just like Superman pretends to be a mild-mannered Clark Kent, Batman pretends to be an egotistical rich guy, living a life of extravagance.

It’s already been revealed that The Dark Knight Rises starts eight years in the future, after Gotham has been cleaned up in the aftermath of Harvey Dent’s death. Could it be that while Gotham appears to be in peace time on the surface that there is a large economic divide between the wealthy and the poor?

While the central plot of The Dark Knight Rises seems to resolve around the evil that is Bane attempting to bring down Gotham, could it be that Bane utilizes more than just the criminal element in his plot? What if Bane appeals to the poor and downtrodden and creates class warfare as part of turning Gotham to ash? Maybe, Bane becomes a hero of the oppressed in the eyes of some, and Bruce Wayne becomes a symbol of corrupt wealth that cares nothing for the common man? Such a plot twist would certainly be an interesting and timely angle for Christopher Nolan to explore in The Dark Knight Rises.

Occupy Gotham: Batman Is The 1%