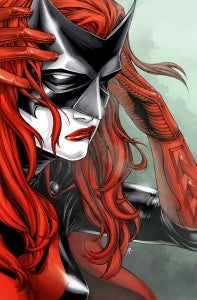 Today marks the day that Astonishing X-Men #51 lands on comic book store shelves, and while  comic book weddings are a typical event in fiction, this issue marks an important point in comics history for more than just a typical "a character marries their long-term steady" kind of way.  It's the first gay wedding from a major comic book company on a major team.  There has been a lot of debate and discussion on this subject in the news, the blogosphere, heck, even the comments section and facebook page for our own site here, all covering various points of view.  Some see the X-Man Northstar's wedding to his boyfriend Kyle as a sales stunt, some see it as asinine.  Others view it as brave and others still view it as terrible and immoral.  Even though all of these points of view have been expressed, at the end of the day the fact that this is happening, stunt or not, does matter and it matters to more than just gay adults and gay teens.  It matters to everyone.

In the practice of full disclosure, I have to confess a personal interest in this.  As a gay man myself, comic books were my escape as a child.  It was comforting and exciting to dive into a world full of costumed heroes, bigger than life villains, and problems that helped me get away from the harassment and teasing that for some reason found me as a gay middle schooler, not sure back then what made me different.  Batman, the Flash, Wonder Woman, the X-Men, the Avengers and the Fantastic Four were my favorites then, and many of those are still now to this day.  I see them in a different light now as an adult, and I can't help but see the political elements that have always been present in comics, not just where gay characters are concerned. 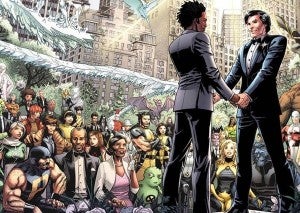 One of the biggest arguments that people have been making against not only the Northstar wedding but also the reintroduction of DC's original Green Lantern Alan Scott as gay has been that comics are not the place for "politics".  Anyone who knows their comic history though knows that comics have been political in some form since their inception, and you certainly don't need the infamous book The Seduction of the Innocent to tell you that. Like many other art forms, music, dance, photography, film, etc., comic books can't help but influence and be influenced by the world around them.  When characters of other races began appearing as super heroes and villains, there was similar puzzlement, confusion and in some cases outrage, but now we can't imagine a comic book universe without them.  Characters like Storm, Black Panther, Cyborg, Sunspot, Jubilee, Vixen, Sand and so many others have become part of the fabric of their comic book legacies.  Reactions now to characters such as Midnighter, Apollo, Obsidian, Northstar and Batwoman are going to seem like old hat in a few years, when gay characters and gay weddings in comics become part of the norm, not just a news item.

Many people, just a couple of years ago, were in a buzz about the announcement of Batwoman as a high-profile lesbian superhero in the DCU.  It was an obvious and direct attempt to diversify the DC universe; the company even said as much.  Wearing the symbol of the bat gave Batwoman instant credibility and public awareness, and ever since her introduction she has become a vital and popular part of the pre and post new 52 DC continuity.  This does beg the question as to why this diversity matters at all. What is the purpose and point behind it all?  At the end of the day, it does matter, especially to impressionable youth, to see themselves represented in the characters, fiction, mass media and pop culture that they ingest daily.  What makes these recent announcements and character introductions more important than ever is that they're occurring in "brand name" books.  The X-Men, Batman, and Green Lantern are all known, highly visible and public commodities.  While it is important and key that gay characters have been around in comics for well over 25 years now, the fact that more characters are appearing in very visible "brand name" books reflects a necessary and important change to the public's perception and awareness of gay characters.  They are worthy to stand beside the legends of Marvel and DC, the two companies most people know about.

By seeing characters such as these in mass media, gay youth, gay teens and gay adults directly benefit.  They are validated.  They are indirectly and directly told that "we see you".  They are part of all words, real and fictional, and they deserve that dignity.  Even though the depictions of characters of a certain sexuality may not be exactly like you in a comic, you can at least compare yourselves to them, and even that is beneficial.  The argument that comics are not and should not be political or personal holds no weight, for we live in an age where the political is personal.  Our art reflects that, and therefore, comics are no different.  Do I love my escapist characters and fiction?  Yes.  But I also love when comics connect to me personally, sometimes in the context of those escapist storylines, sometimes in more direct and overt ways.  Again, I'm not advocating that all art must teach us something all the time to be of value, but when it attempts to be a mirror to our world, we at least owe it the courtesy of taking a look at the reflection.  It's my hope that gay children who may be questioning their place in this real, tough world will take a look at the fictional one and see possibility for themselves.  By seeing Batwoman, Northstar, Green Lantern, Midnighter, Apollo and so many others, not only will they find a sense of belonging and value, but others will see them as valuable as well.

Of Gay Lanterns, Batwoman, Gay X-Men Weddings and Why it DOES Matter