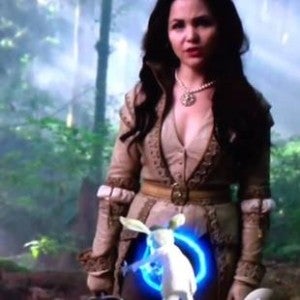 Social media (and now Entertainment Weekly, as well) are having a field day with a promotional spot for Once Upon a Time in Wonderland that inadvertently saw the White Rabbit draw a hole to carry him to Wonderland...superimposed over Snow White's crotch on the series's sister show Once Upon a Time. The CG rabbit (seen in the video embed below) scrambled to the middle of the screen and draws a hole in the air, which then becomes "real" and he vanishes down the rabbit hole, replaced by the show's logo. However, the timing of the graphic during the Once Upon a Time broadcast came when Ginnifer Goodwin--Snow White--was standing front and center, filmed from the knees up. The result, as you can see, is that the rabbit hole covers her genital area. EW spoke to Once Upon a Time and Wonderland showrunners Edward Kitsis and Adam Horowitz, who mostly tried to play it for laughs themselves. "I never thought I would have so many emails about Ginny's vagina," Kitsis joked, adding, "It's embarrassing, but at the same time, it's so silly it's hard to take serious. It's so obvious that somebody didn't realize what they were doing." "We're grateful ABC is spending so much time promoting both shows, but it was an interesting cross-promotion," Horowitz said.

Once Upon a Time in Wonderland's Blundered Promo Spotlights Actress's Crotch