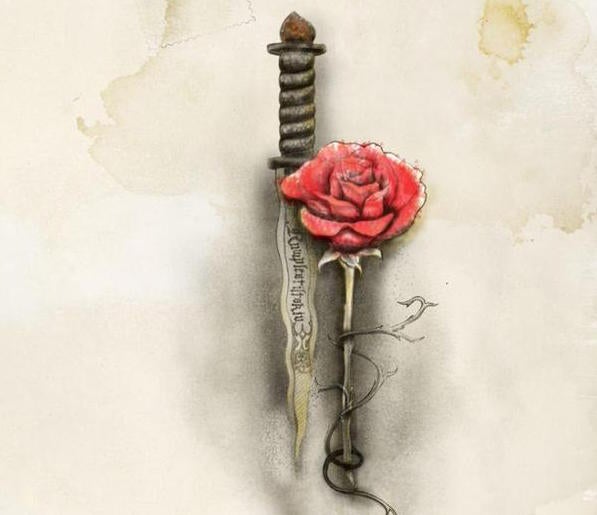 ABC’s Once Upon A Time has released its second teaser image for an upcoming project with Marvel Comics.

The Twitter teaser, which is One Upon A Time’s second out of four for an upcoming project, promises that “A magical tale will reveal itself Friday.” The message came with an image of a red rose and dagger. The image most likely suggests that Disney’s Beauty and the Beast will play a role in the upcoming project (a red rose played a critical part in the curse that had befallen the Beast), but it could possibly hint at another character.

This image follows yesterday's one-sheet featuring a hook. While the hook made us think that the ABC and Marvel collaboration would focus on the villainous Captain Hook or Peter Pan, the inclusion of another classic Disney property indicates that a much larger story could be afoot. It’s also worth mentioning that today’s teaser doesn't  dispel our theory that project will be a Once Upon A Time Original Graphic Novel, following the Once Upon A Time: Shadow Of The Queen OGN that Marvel published in 2013. But with two teasers to go before Friday’s reveal, the exact nature of the graphic novel could be anyone’s guess.

Once Upon A Time is an ABC series that brings Disney Animation characters into the “real world” in a small Maine town. Stuck in the far less enchanted realm, the characters live amongst flesh-and-blood mortals as they make their way through the strange new world.

A magical tale will reveal itself Friday. Tease 2 of 4... #OnceUponATime pic.twitter.com/V0oqJGk6ZR

Once Upon A Time returns to ABC on Sunday, March 1st at 8:00 p.m. on ABC. Make sure to check back in tomorrow when the Once Upon a Time teaser is released.

Everything Coming to Peacock in August 2021

Superman: Son of Kal-El #1: Everything a Superman Story Ought To Be