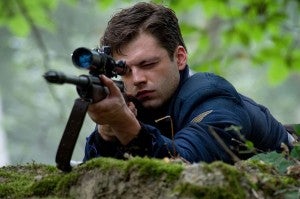 Sebastian Stan, who played Bucky Barnes in Captain America: The First Avenger and will return to the role in next year's Captain America: The Winter Soldier, has reportedly been replaced as The Mad Hatter on the ABC drama Once Upon a Time. The character, who is reportedly being eyed for his own spinoff, will reportedly demand too much time than the busy Stan, who is currently wrapping up a run on Broadway before heading to The Winter Soldier, can give it. As The Winter Soldier, Bucky will presumably play a larger role in the second Captain Americafilm than he did in the first, when he was simply Cap's best friend and later sidekick. Stan has played the character in six episodes of Once Upon a Time, but couldn't commit to headlining his own series, reports Deadline.

Once Upon a Time Replaces Captain America Star as Mad Hatter