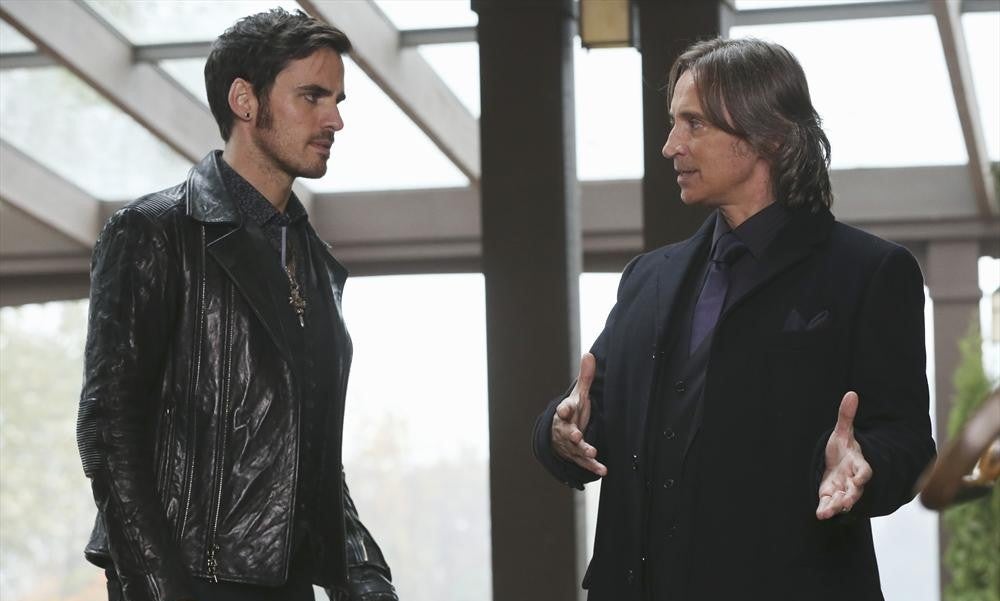 The winter finale of Once Upon a Time opens with Elsa (Georgina Haig) finally demolishing the ice wall around Storybrooke, even though Ingrid’s magic is still keeping all of the residents inside its borders. This is bad news for Anna (Elizabeth Lail) and Elsa – as Arendelle is currently being conquered by Hans and needs Elsa’s magic more than ever.

Elsewhere, Rumple (Robert Carlyle) commands Killian (Colin O’Donoghue) to follow Anna and to keep her from leaving town, since her relationship with Belle could risk Rumple’s mistake. He plans to escape that night, when the stars in the sky will align with the stars on the Sorcerer’s Hat.

In a flashback, Rumple discusses his recent trip to Camelot with Belle (Emilie de Ravin), his housekeeper. He tells her about a magic gauntlet that can reveal anyone’s weakness. In modern day Storybrooke, Rumple proposes to Belle that they go on a proper honeymoon to “a magical city called New York.”

Elsewhere, Regina (Lana Parrilla) and Robin (Sean Maguire) resurrect Marian (Christie Laing), who meets with Regina at the diner shortly after. She tells Regina that she understands that Robin has moved on, and if he isn’t going to be in love with her (his wife), then she doesn’t want to stay with him out of obligation.

Rumple takes Killian to the Sorcerer’s house, led to a portal by one of the magical broomsticks.

Henry (Jared Gilmore) meets with Belle, who is packing for the trip. He’s worried about Regina because of the storybook. The two hunt around the pawnshop for an extra suitcase for Belle, where they find the magical gauntlet.

The Belle and Rumple flashback continues, where Belle tries to talk to Rumple about his heart. He uses his magic to send her outside to hang clothes on the line. She’s soon distracted by a Dalmatian pup, which she follows into the woods. Suddenly, black-gloved hands grab Belle and pull her into the darkness.

Killian meets Emma (Jennifer Morrison) at the diner for a celebratory drink – since he just found “the portal to Arendelle.” It’s quickly revealed that Rumple is speaking through him, using him like a puppet. He says that all they have to do is walk right through the portal. Emma can tell that something’s off.

Back in the flashback, Rumple cannot find Belle. A raven flies overhead and drops a message from Belle, saying that he must bring the gauntlet to a specific location at a specific time, or she will be killed. Rumple is incensed; he shakes his fist at the raven and says that he knows who its master is.

Regina, Robin, and Marian spend time with young Roland at a pond, where Robin tells Regina that he has chosen her. Marian somehow collapses, with icy features indicating that her spell was never entirely lifted. They could take her out of Storybrooke to be cured – but once they leave, they’ll never be able to come back. Robin and Roland would have to go with her, never to return, which he agrees to. 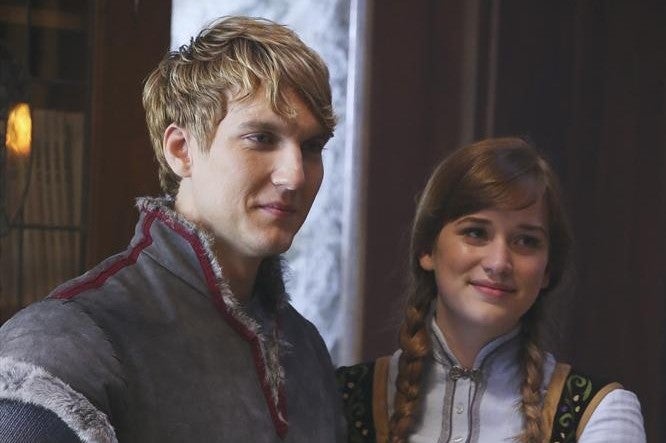 Rumple meets with Regina to say goodbye to her for good, and she tells him how Henry has been trying to figure out who wrote the storybook. Rumple claims not to know of the author, and he claims that she should “take” her happy ending, just like he “took” his with Belle, suggesting she kill Marian herself.

Regina and Robin say a tearful goodbye, before he crosses the line to leave Storybrooke forever with his family.

In the flashback, Rumple arrives with the gauntlet to meet Maleficent (Kristin Bauer van Straten), where Belle is tied up. She says he’ll give Belle back in exchange for the Gauntlet, prompting him to choke Maleficent with magic. Ursula (Merrin Dungey) and Cruella De Vil (Victoria Smurfit) appear as her back-up team, as Ursula starts slowly constricting Belle with her tentacles.

Rumple drops Maleficent, and Ursula gives Belle back to him. Maleficent, Ursula, and Cruella disappear. Rumple swears that he doesn’t have feelings for Belle, but she can tell that he’s lying.

In the present, Henry, Emma, her parents, Anna, Elsa, and Kristoff go to the Sorcerer’s house and find the portal, which is decorated with Arendelle symbols. They’re anxious to get home, stop Hans, and arrange the wedding between Anna and Kristoff. Just before Anna walks into the portal, she asks about Mr. Gold – who she never realized was Rumplestiltskin. They realize that they’ve been played.

Rumple and Killian wait in the clock tower until the exact moment that the stars align with the Hat. A beam of light hits Rumple, just as Emma and Mary Margaret (Ginnifer Goodwin) break in to stop them. Rumple freezes them and tries to destroy Killian’s heart in his hand. Unable to crush it, he turns to find Belle, who has commanded him not to with the dagger.

She has her husband teleport them to the Storybrooke border with a poof of magic, so they can have a personal talk. She used the gauntlet to find Rumple’s weakness – which led her to the real gauntlet, as his true love is his power. Rumple begs her not to leave him, but she declares that it is too late. Where before she saw the man that was behind the beast, “now there is only a beast.”

Belle commands him to leave the town, slowly pushing him backwards across the border, until Rumplestiltskin is out of Storybrooke.

In Arendelle, Anna reveals her wedding dress look to Elsa, after they’ve apparently kicked out Hans, as indicted by a comment about his black eye. It’s the day of Anna’s wedding, and Elsa walks her to the ceremony.

Killian returns to Emma with his heart, which she pushes back into him, prompting an enthusiastic kiss. Next, Emma finds Regina and convinces her to have a drink. Henry bursts in, having found an entire library of empty storybooks in the Sorcerer’s house – who appears to be the author. Emma agrees to help them in their quest to find Regina a happy ending.

Six weeks later – Rumple steps off a bus in New York City. In a quick flashback, he meets with Maleficent, Cruella, and Ursula, “the Queens of darkness,” from whom he steals back the gauntlet. They warn him that villains never win, so perhaps he should just join them.

In New York, Rumple finds Ursula working at an aquarium. He knows now that villains never win, unless the author changes the story. He recruits her help, leaving two more stops for them.

Once Upon A Time Season 4 Episode 11 Recap With Spoilers: Heroes and Villains