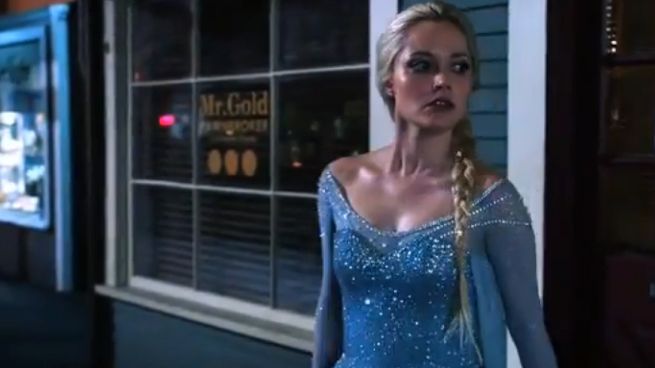 Episode two, “White Out,” opens in Storybrooke right after Elsa (Georgina Haig) has found Anna’s necklace in the pawnshop. She decides that the only way to find her sister is to lock everyone in the town, via a snow barricade on the borders of Storybrooke.

Meanwhile, Mary Margaret (Ginnifer Goodwin), David (Josh Dallas), Emma (Jennifer Morrison), and Henry (Jared Gilmore) are settling in for the night when they receive a message from a carrier crow from Regina (Lana Parrilla). It states that she doesn’t want to see Henry for a while, completely crushing him. Suddenly, Elsa’s enormous ice wall unintentionally cuts the power to the whole town, so Emma and David hop in the car to see what happened, discussing Henry on the way.

Hook (Colin O’Donoghue) shows up at the ice wall right after Emma and David, prompting a cute “what are you intentions with my daughter” moment between David and Hook. Emma finds an entrance into the wall, meeting Elsa inside. Elsa quickly explains that she’s looking for her sister Anna, whose necklace she found in the store “filled with the things.”

Mary Margaret stays home, quickly to be greeted by a frustrated Grumpy (Lee Arenberg), Happy (Mike Coleman), and Granny (Beverley Elliott). They say that – since they helped her win her kingdom back from Regina, and since Regina is shirking her mayoral duties – it’s Mary Margaret’s duty to bring back the power. They go to the power plant, where the dwarves annoying bickering eventually makes Mary explode, scolding the three and claiming that it was their actions that made Regina so evil. Mary Margaret figures out how to fix the power by herself, inspired by baby Neal, accepting her new status as mayor.

David and Hook soon burst into the ice wall, scaring Elsa, and her fear causes the wall to collapse, locking herself and Emma inside the cave. Hook tries to pick at the ice with his hook to no avail, as David points out that it can only be broken with magic. They are able to talk to Emma and Elsa through the radio, and Elsa tells them she is looking for Anna.

Emma pleads with Elsa to have their conversation elsewhere, until she realizes that Elsa cannot control her magic without Anna around. Emma is unable to use her own magic to warm up and slowly starts losing consciousness, while Elsa tries to keep awake with conversation.

David and Hook storm into the pawnshop to ask Mr. Gold (Robert Carlyle) for help with the ice wall. When they see a picture of the necklace Elsa took, David realizes that he knows Anna.

In a flashback “many years ago” we find Anna (Elizabeth Lail) in the Enchanted Forest, on her way to see pre-Charming David – who’s apparently a friend of Kristoff. Anna tells him only that she’s on a secret mission, giving him a fake name. David quickly guesses that she’s Kristoff’s fiancée, allowing her to crash in his barn, before they are interrupted by the local warlord: Bo Peep.

Bo Peep drops by to extort David and his mother, demanding that they pay “what they owe” her. If they don’t have the money by the next day, she will take their farm leaving only their horse. David tells his mother that they should run, but Bo Peep curses them with her staff. Now they are “her sheep” and can never leave “her flock.”

Anna encourages David to stand up to Bo Peep, even offering to teach him how to sword fight. They are later shown practicing, until David gets discouraged at his lack of talent. He wants to give up, but Anna calls him a coward and tells him that he doesn’t know what loss is like. David responds with the story of the loss of his father. Regardless – Anna says she will be there to help the next day.

In the morning, David cannot find Anna but instead finds Bo Peep, who’s added another sheep to her flock. David goes to Bo Peep later in the day without the money, fighting off both her and the guards. He takes Bo Peep’s staff and uses it to find and free Anna. When Anna leaves town the next day, David gives her his horse, and David’s mother gives Anna the name of Rumplestiltskin, the man in town who will be able to tell her more about magic.

In Storybooke, David goes to see modern-day Bo Peep, a butcher. She refuses to help, so David and Hook take her staff by force. Elsa radios them on their way out the door to say that Emma is dying from the cold.

The men rush back to the wall, and David talks to Elsa on the radio, saying that she will have to find them a way out, on her own. He gives her a similar speech that Anna once gave him. Elsa recognizes Anna’s words and draws courage from them, thawing a hole through the wall and saving Emma.

As they warm up Emma, Elsa realizes that she lost the necklace. On the bright side, they inspect Bo Peep’s staff, and though they can’t see anything, they can hear Anna’s heart beat. David then introduces Elsa to Mary Margaret, telling Elsa that his family will find Anna because they never give up. David introduces Elsa to Mary Margaret and tells her about his family, that doesn’t give up. His words inspire Henry to visit Regina, who accepts him back after he declares that he will not give up on her.

Emma and Elsa go back to the destroyed ice wall, so that Elsa can take the barrier back down. Unfortunately the magic doesn’t work. Elsa says that there’s no reason it should stay frozen. She’s the only one with the power, there’s not reason she shouldn’t be able to fix it. Cut to a lady scooping ice cream who has the same power as Elsa

Lastly, Emma and Elsa go back to the now-destroyed ice wall, so that Elsa can use her magic to thaw it. Elsa finds that her magic isn’t working, but she doesn’t understand why. She’s the only person with freezing abilities, so who could be keeping up the wall?

The episode ends back in Storybrooke, where Grumpy and Happy are buying ice cream. They joke with the shop-owner that she must hate when the power goes out, since her ice cream would melt. Once they leave, we see her use magic to freeze some new treats.

Once Upon A Time Season 4 Episode 2 Recap With Spoilers: White Out