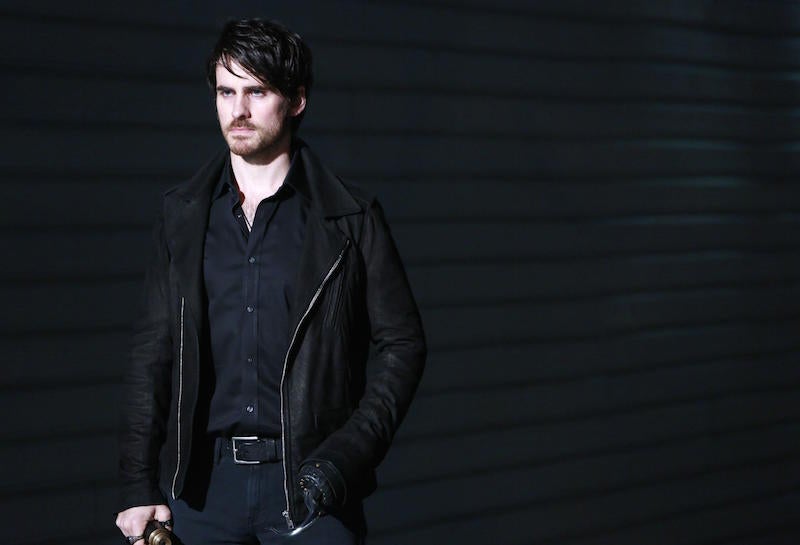 The winter finale of season five, “Swan Song,” begins with Hook (Colin O’Donoghue) reminiscing about the last time he saw his father, who abandoned him and sold his sons into servitude. Meanwhile, Emma (Jennifer Morrison) decides that she has to do whatever it takes to stop Hook and commands the whole group to split up.

Regina (Lana Parilla) and Robin (Sean Maguire) do not get far before running into Zelena (Rebecca Mader), who has plans for full custody over her child. Suddenly, a group of Dark Ones appears, taking the couple away. Snow (Ginnifer Goodwin), Charming (Josh Dallas), and Henry (Jared Gilmore) are surrounded by Dark Ones in a similar fashion. They each find themselves with a peculiar mark on their arm, which Rumplestiltskin (Robert Carlyle) explains to be the Mark of Charon, who navigates the ferry to the Underworld. The freed Dark Ones plan to take the souls of the marked living, who will replace them in Hell.

Next, a flashback begins, where we see Regina recruit Hook to kill her mother – long, long ago. To put him to the test, she first requires that he kill someone else: his father, who’s working at a tavern. Hook sticks around until closing time, when he confronts him. His father explains that he has changed, has since re-married, and now has another child. Hook has to at least make it seem as if his father has been killed, so he organizes a way for him to run away instead, with his son.

Back in Storybrooke – Snow, Charming, and Henry have one last meal at Granny’s, choosing to spend their last hours alive surrounded by loved ones. Nearby, Emma reveals her plan to Regina: She wants to sacrifice herself, after siphoning all of the darkness inside. They obtain Excalibur from Rumple, who gives away freely, after arranging for Belle (Emilie de Ravin) to escape town and live her life. 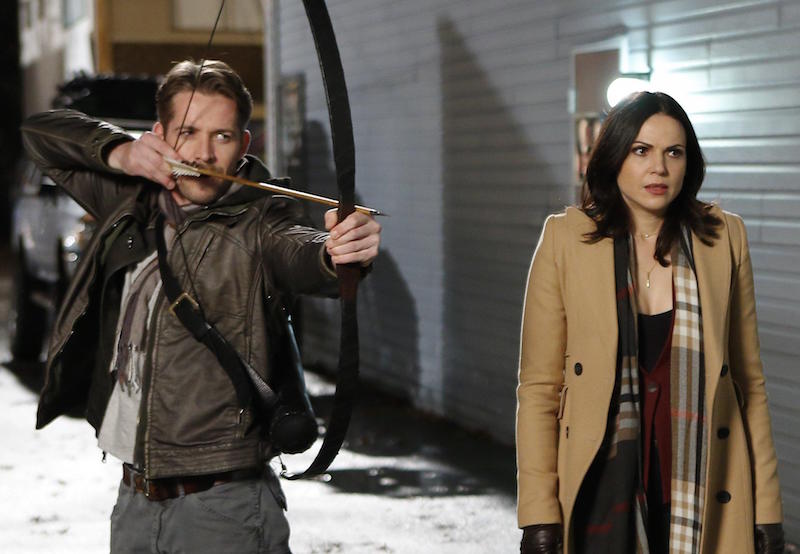 Next, Regina uses a magic wand to summon a cyclone, which sends Zelena to Oz. And as Emma braces herself for her plan, Hook appears at her house. She tries to fight him right there, but he cleverly transforms into Henry, easily persuading Emma to hand over Excalibur. Without it, Emma has no plan to save her family.

Night finally arrives, and all of the marked find themselves at the lake, near the entrance to the Underworld. Hook appears, followed by Emma, who cannot do much but watch. Regina suddenly invokes a memory – claiming there is no way that Hook will truly destroy their family.

Hook’s flashback continues, when he follows his father back to his home. He watches him with his new son. Not only did he name the boy Liam, which was Hook’s brother’s name, but also, he tells the boy the same things he told Hook when he was little. Suddenly enraged, Hook takes back his offer and kills his father, who says “it’s never too late to change,” as he dies.

Again at the lake, Nimue begins to choke Emma, while Hook thinks about Regina’s words. He eventually stops Nimue, and then, Hook uses Excalibur to evaporate the Dark Ones, channeling the darkness inside of himself. He begs Emma to kill him, allowing him to dies as “the man he wants to be” – a hero. She reluctantly obliges, and in an instant, Emma is transformed back to her normal self, Excalibur turns to ash, and Hook dies.

The next day, Belle returns to Rumple and says that she wants to be with him again, after the selflessness of his recent actions. Meanwhile, Emma realizes that she can still hear the whispers of the dagger. She meets with Rumple that evening, who reveals the truth. Rumple never gave them the real Dagger. Instead, Emma used a bewitched sword to effectively kill the Dark Ones and Hook – by channeling all of the darkness into just one Dark One: Rumple.

Emma now has significant leverage over Rumple, with the ability to tell Belle at any moment the truth about her “hero.” With this in mind, Rumple agrees to help her enter the Underworld, where she plans to save Hook.

The episode ends at the lake, where Emma – and her family and friends – approach the ferry to descend into the Underworld.

Once Upon a Time Season 5 Episode 11 Recap With Spoilers: Swan Song