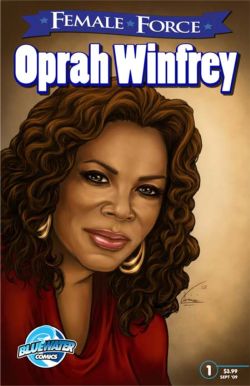 Having apparently run out of political figures to use in its Female Force line of comic books, BlueWater Productions is now turning its attention to one of the most famous and successful women in America. Yes, talk show host and media icon Oprah Winfrey is now going to be featured in her own comic book, as part of an upcoming issue of Bluewater Productions' Female Force biography comic series. According to BlueWater Productions, Female Force highlights strong and influential women who are shaping modern history and culture. The special Oprah issue will tell the story of Oprah's early childhood traumas and cover her rise to becoming one of the most wealthy and powerful people in the world. The issue will devote coverage to Oprah's numerous careers including news anchor, Oscar-nominated actress, award-winning producer, entrepreneur, philanthropist, and, of course, talk show queen. "When you conjure up the concept of Female Force, there are very few who immediately come to mind and Oprah's name rises to the top of that list," said Bluewater president Darren Davis. "Her influence on our culture has been profound." The Oprah Winfrey issue of Female Force is scheduled to be released in comic book stores in September. The issue is written and drawn by artist Joshua LaBello with Vinnie Tartamella providing the cover art. "She might not wear a cape, but she is some kind of super hero to a great many people, " said Labello. "Despite a childhood riddled with abuse and adversities, she turned her wounds into wisdom, grabbed hold of every opportunity, and reached a level of success that practically redefines the term."

Oprah Winfrey Gets A Comic Book