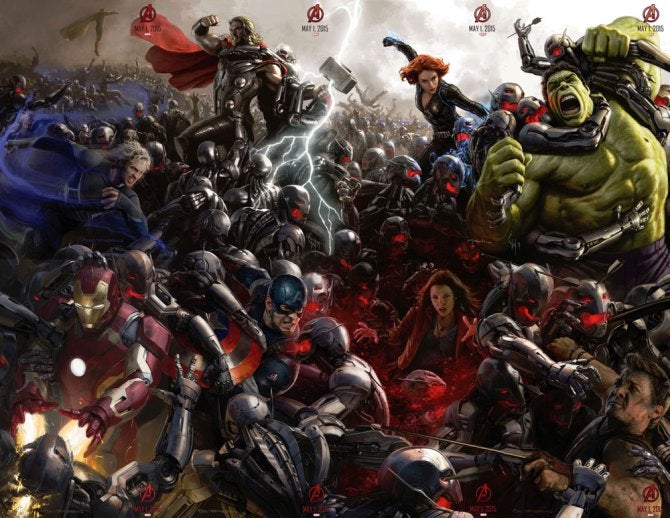 The new Avengers: Age of Ultron trailer made it to the web faster than Quicksilver could, leaking in less than 24 hours after its very existence was announced. While the trailer was intended to release during next week’s Agents of S.H.I.E.L.D. episode, it now stands before fandom and its judgment. It's worth noting that this is the trailer's international version (hence the April 2015 release date) so there still could be some differences between what fans can see now, and what they'll see next week.

So, what new bits of information did the trailer yield? Not a terrible amount, to be honest, but enough to increase the sequel's intrigue as it ramps up to the 2015 marketing push. Here, we raise the biggest questions that will haunt us between now and next summer.

There were a few key clips indicating that "The Big Guy" won't play so nicely with The Avengers in their sophomore outing. Case in point: Hulk Buster Iron Man and the Jade Giant slugging it out on the streets. But we already knew this would happen. What's more telling, are two other brief snippets. The first shows Bruce Banner bound up in the Quinjet as his fellow Avengers stand beside him. The other displays Bruce Banner stumbling through the woods on his own. Seeing as he's only wearing pants in this clip, it's safe to guess that he just woke up from a Hulk episode. But still, why wouldn't the Avengers be there to aid him in his fragile state?

There's a brief clip where Tony Stark says, "This is the end, the end of the path that I started us on." It fits in line with Tony's status quo at the end of Iron Man 3, where Tony seemed ready to put his life as a superhero behind him. Could Tony's twisted creation, Ultron, be the final push he needs to hang up the suit for good? Rumors have circled that the events of Age of Ultron would lead Tony to self-shame and retirement, and this line only furthers them.

Is Something Wrong With Thor?

There are two clips where we see the God of Thunder acting less than noble toward his fellow Avengers. First, we see Thor rush Tony Stark and hoist him by his throat. Is he just mad at Tony for creating Ultron, or could it be something worse? Thor's troubles only worsen in the split-second clip where we see him drop Mjolnir. It could just be that Thor has some sweaty palms, but what if Thor becomes unworthy and can no longer wield the Hammer? It would conveniently take Thor off the board for the rumored squad of new Avengers heading into Avengers 3. Plus, we haven't received confirmation of a Thor 3 yet. This is a long shot in the dark, but could Marvel have plans to bring the new, female Thor into the cinematic universe? You don't debut a new character on The View and not make good use of her, after all.

Who's That Bearded Guy?

There was a brief moment where we saw a shirtless, bearded man staring at the camera. Some are guessing that the man is Andy Serkis, Ultron's rumored motion capture actor, but no one can confirm it. But if it is Serkis, could this mean that Ultron pulls a Bicentennial man and transcends his robotic form? He does talk a lot about cutting strings, after all.

What Could Break Captain America's Shield?

The end of the trailer shows a fairly dramatic shot: Captain America’s shield in pieces. What force could be strong enough to shatter the Sentinel of Liberty's iconic weapon? Not even Thor's hammer could break it in The Avengers.

Seriously, where is that guy? Even Quick Silver and Scarlet Witch got some screen time.

What other questions did the Age of Ultron trailer raise for you? Let us know in the comments section.