A pair of images floating around the Internet appear to reveal the appearance of The Lizard, The Amazing Spider-Man's central villain when it comes to theaters next year.

First, on Monday images of officially-licensed Pez dispensers being released in promotion of the Marc Webb reboot, which hits theaters in July.

The Pez dispenser, like a toy, is likely to have a good deal of degradation between the way it actually looks onscreen and the way it looks on plastic. It's probably not a really good indicator of how the character will actually look in the movie, even if it got fans all hot and bothered after the studio had done such a good job of keeping the character's look under wraps. 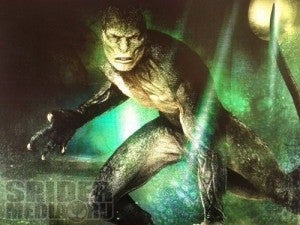 Today, though, it was followed up by something marginally more lifelike: an alleged piece of concept art appeared at Spider Media this morning which purports to show a full-body painting of The Lizard as he's meant to appear in the film. Many fans and journalists who have already seen demo footage (including an article at Bleeding Cool) have expressed that in spite of no verification from the studio regarding the image's provenance, it at least matches what they've seen.

In the comics, Kurt Connors was a scientist and a veteran who, while working with reptilian DNA in hopes of discovering a way to rebuild lost limbs, inadvertently becomes a lizard-man. His earliest incarnation was just about a step up from The Incredible Hulk--as The Lizard he was much more sinister and brutal than his human persona ever seemed capable of, and he often expressed regret for the his actions when he changed back to his human form. Connors's character appeared in Spider-Man 2 and Spider-Man 3, played by veteran character actor Dylan Baker, but never had more than a few minutes' screen time or made the transformation (he was depicted in the films as one of Peter's college professors). In the upcoming reboot, which has no connection to his appearances in those films, it's unknown exactly who Connors will be in his human form, except that he'll be played by Notting Hill's Rhys Ifans.