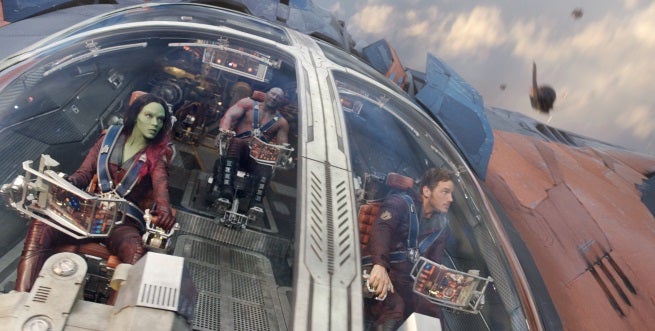 A new report claims that part of the reason behind the creative changes on Star Trek 3 is because Paramount Pictures is looking to emulate the character- and creature-driven, high-concept sci-fi adventure feel of James Gunn's Guardians of the Galaxy film.

The claim comes from Devin Faraci, one of nerd-Hollywood's most established reporters and gossip columnists over at Badass Digest. He says, in part, that it was a conflict over the script for the third installment of the rebooted Trek franchise that saw Roberto Orci either leave the project or be escorted out, depending on who's the one doing the talking. Either way, he says, Edgar Wright was indeed offered the role and the reason he isn't on the widely-reported director shortlist is that he declined the offer, perhaps because the same thing that happened to Orci on Trek just happened to Wright on Ant-Man and taking over such a project would likely leave a bad taste in the mouths of all involved.

The report elaborates that Guardians has lit a fire under Paramount, who feel that the good-but-not-overwhelming performance of Star Trek and Star Trek Into Darkness could be improved upon with the right approach post-JJ Abrams.

"They look at Rocket and Groot and then they look at Keenser and they wonder why he doesn't have more of a role," Faraci wrote, adding that "The Enterprise crew aren't galactic ne'er-do-wells, but many of the best Trek stories have them bouncing off each other."

There's no concrete release date yet for the film, which is expected along in 2016 to capitalize on the 50th anniversary of Star Trek.