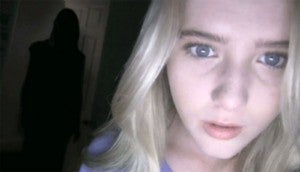 Horror sequel Paranormal Activity 4 is set to make $34 million this weekend, taking the top spot at the box office and soundly defeating Alex Cross, the #5 movie and #2 new movie opening this weekend. That will come in at around $13 million. Actress Katie Featherston, who played in the first two films and now this fourth, says that during photography on Paranormal Activity 4, she feels like she shot enough material to make another couple of the "found footage" movies without having to go back in front of the cameras again.

Argo will make around $19 million, very slightly down from last week's opening, and rates #2 on the chart. Ben Affleck's based-on-a-true-story spy thriller is widely expected to take home armfuls of awards this season, and has already spawned a kind of spinoff of a kind--Science Fiction Land, a documentary which tells a non-dramatized version of the story in the film, and which doesn't (as Argo unfortunately does) remove the character of Jack Kirby, who provided the artwork necessary to make the CIA's fake movie seem real.

Alex Cross, the first starring role for media mogul Tyler Perry in a movie that he didn't write, direct or star, was not necessarily expected to take the top spot this weekend, but it was widely expected to make at least $20 million, which would have given it the #2 position. According to Deadline, a sequel is already being discussed between Perry and the studio. If the current numbers hold, though, it could be a difficult sell to get Double Crossed made. Barring a last-minute surge in ticket sales, the Tyler Perry-topped installment will actually draw a smaller opening weekend than Along Came a Spider, the 2001 film in which Morgan Freeman portrayed Alex Cross. That film opened at $16.7 million at a time when ticket prices were only about 72% of what they are now. Kiss the Girls, the first-ever Alex Cross movie (also with Freeman), opened at $13.2 million back in 1997, when ticket prices were just 57% of current levels.