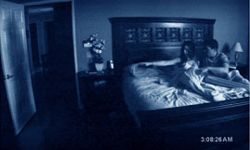 In a well-orchestrated viral marketing campaign, Paramount Pictures left it up to the fans to decide if Paranormal Activity would get a nationwide release. Initially, Paramount did a midnight only limited release of Paranormal Activity in select cities, but Paramount promised a broad release if one million fans demanded the movie on their website. After two weeks of great reviews and strong fan buzz, Paramount has announced that over one million fans have now demanded the movie at ParanormalMovie.com, so Paramount will live up to its promise of releasing the movie nationwide beginning Friday, October 16, 2009. "From the very beginning, we put this film in the hands of the fans and we trusted them to tell us where and when it should be seen. We couldn't be more thrilled by their overwhelming support and we are happy to release the film in every town - big and small," said Rob Moore, who is Vice Chairman of Paramount Pictures. Tickets for Paranormal Activity will go on sale via ParanormalMovie.com by 5 PM PST on Tuesday, October 13, 2009.

Paranormal Activity Going Nationwide Due To One Million Fans