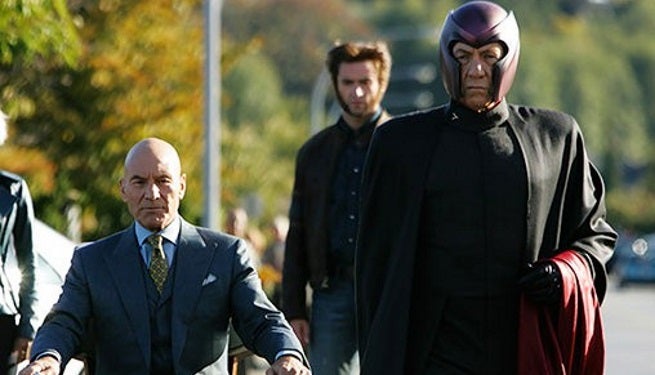 While Patrick Stewart’s Professor X may be sitting out X-Men: Apocalypse, his BFF – both on and offscreen – Ian McKellen’s Magneto will apparently be making an appearance.

Stewart previously said that he thought he and McKellen would both be out of X-Men: Apocalypse. While that seems to remain the case for Stewart, the actor now seems pretty positive that McKellen’s Magneto has a role to play.

“Yes, I understand that it seems to be very unlikely that I will be in the next "X-Men" movie, which is almost getting ready to start shooting in Montreal,” Stewart tells Oregon Live. “…But Magneto, Ian McKellen, is certainly going to be in it.”

It will be interesting to see what kind of role McKellen’s Magneto will play in Apocalypse, given that the film is taking place in the 1980s and that Michael Fassbender is still playing Magneto the younger in the film. Perhaps there will be a flash forward scene? Or maybe this is the first hint of time travel playing a role. Apocalypse stories, after all, are known to sometimes have that element ingrained in them.

However, just because he’s out of Apocalypse doesn’t mean Stewart is out of the X-Men film franchise entirely. Stewart reveals that he’s in talks to team up with Hugh Jackman in the next Wolverine movie.

“And what I'm very excited about is that we have been talking about a Wolverine movie,” Stewart says, ”which would team Hugh Jackman and myself together. Wolverine and Professor Xavier. That would be a very different sort of "X-Men" from the four movies that I've already done.”

The still untitled third Wolverine solo movie is expected to be released March 3, 2017.

Patrick Stewart May Appear In Next Wolverine Movie, Ian McKellen To Appear In X-Men: Apocalypse