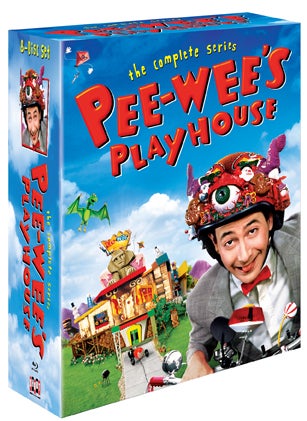 Cult-classic kids' show Pee-wee's Playhouse is coming to Blu-ray for the first time -- all at once.

Pee-wee's Playhouse: The Complete Series 8-Disc Blu-ray box set contains insightful bonus content and will hit home entertainment shelves nationwide on October 21, 2014 from Shout! Factory. It will include not only the series itself but also the Pee-wee's Playhouse Christmas Special (but not the Tim Burton movie -- sorry, completists; you'll have to wait for a Twin Peaks-style reissue for that).

Also available to own on the same day is Pee-wee's Playhouse: Seasons One and Two in a high-definition 4-DVD set.

Calling the remastering "an enormous undertaking," Shout! revealed that Paul Reubens (who  played Pee-wee and was a writer and producer on the series) personally oversaw the transfer.

The box set is already available for preorder at Amazon and Shout! Factory's website.