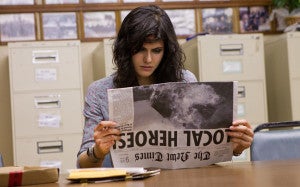 Being a pretty girl around thirty years old in Hollywood, and especially one with dark hair and a penchant for working in "genre" films, means constantly answering questions about playing Wonder Woman, Zatanna, Scarlet Witch or whatever other superheroine might finally come to the big screen next.

So it is for Alexandra Daddario, who stars in the newly-released Percy Jackson: Sea of Monsters. She was, perhaps not surprisingly since the movie features gods and demigods, asked about the prospect of playing the Amazing Amazon in a prospective feature film based on the character.

Percy Jackson's Alexandra Daddario "Would Love to Be" Wonder Woman