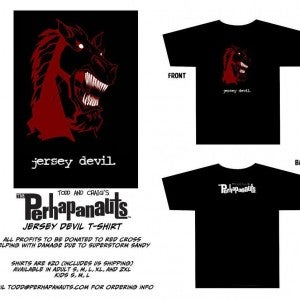 Craig Rousseau, the artist behind Image Comics's The Perhapanauts, has designed a new t-shirt featuring The Jersey Devil as he appears in the comic, which he and Perhapanauts co-creator Todd Dezago are selling via Perhapanauts.com to benefit the Red Cross's hurricane relief efforts in the wake of "Superstorm" Sandy.

"In the midst of all the hubbub surrounding the debut of our latest series, Craig e-mailed me and said that he'd like to do something to help out with getting relief to the victims of Hurricane Sandy," Dezago wrote at the pair's blog. "One of our good friends, Mike Estelle, was evacuated from his home on the Jersey shore, only to come back to find much of it underwater, his floors destroyed and all manner of collateral damage. Craig jumped into action and, in honor of new jersey, though many other areas were devastated as well, he created this exclusive JERSEY DEVIL/SUPERSTORM SANDY t-shirt."

All profits from the sale of the shirt--which matches a line of shirts offered on the site and at conventions and featuring the mythological characters that make up the heroes and villains of the comic--will go to the Red Cross. Details on ordering one of the shirts can be found at Dezago and Rousseau's Perhapanauts blog.

The blog, t-shirts and other merchandise have been a big part of Perhapanauts fandom in recent years, since the comic book series has been publishing irregularly but the pair's convention and online appearances have helped keep them connected with the readers.