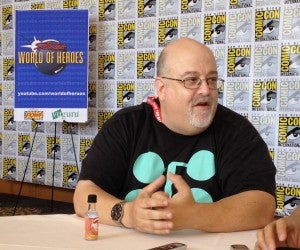 Veteran comics writer Peter David, who suffered a debilitating stroke last week while vacationing with his family, took his first independent steps in a week, according to his wife Kathleen (via Walter Simonson's Facebook page). "Peter David WALKED! A few steps but they were real steps! He says his leg felt strong again," Kathleen David reported this morning. The writer and his wife have so far been very open about their experiences coping with the aftermath of the stroke. This news is not only good for the X-Factor writer, but a big step from where they were at just yesterday when David blogged her husband's frustration at slow progress. She wrote, in part:

Progress is slow and Peter is frustrated which is perfectly normal for him to be so. He is working well with the PT and OT staff. They are still working on the white cell count but it is becoming closer and closer to be declared an aberration and let's move on. If you think of it, we don't know our white cell count day to day. We are having our blood drawn one or twice a day and put through a battery of tests (OK may be a few of you are but you are in the minority). So a change in the white cell count could just be how his body can react to stress and believe me, his body has been stressed recently. So cross your fingers that we get the GO on Monday to move Peter to the next step and get him working back to his old self.

Massive Asteroid Flew By Earth Before Scientists Even Saw It