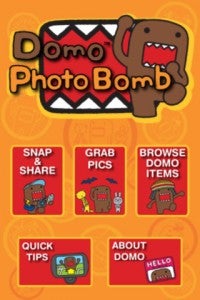 Here at ComicBook.com, there are few things we enjoy more than a funny picture we can post to our social media sites. And so when the good folks behind Domo gave us an opportunity to solicit some from our readers and, as part of the deal, get a prize pack for one lucky fan for their trouble, we figured, "Why not?". Here's what we got in our e-mail:

On numerous social-sharing sites, millions of people are using a Japanese character's image as the inspiration for everything from crafts to fashion whether they realize his massive appeal or not. With more than 1.5 million YouTube videos, over  1 million Flickr photos, over  4 million total Facebook friends, hundreds of products generating over $50 million in retail sales and all while continuing to pop up on hit shows like 30 Rock and The Big Bang Theory this creature named Domo has quietly earned a tremendous following. Recently Domo came out with his first app, which is centered on another Internet trend…photo-bombing. Unlike other characters that have shot to fame due to a hit television show or something similar, Domo has become a force solely due to his ambiguous look and the ability fans have to make him their own. Now the app allows them to have another fun way to do so.

To that end, they suggested a contest where people could send in their photo-bombed Domo shots for the chance to win a Domo prize pack. Sounded good to us--so what, exactly, should you do? Instead of just vacation photos (especially since we put this off a while and most people aren't on vacation right now), do something really zany with it, like inserting Domo into the oddest (safe for work) photos you can, so we can put together a gallery of funny photos. Fans can vote on our Facebook page using "likes" and the photo that gets the most likes by November 30 wins the contest. Simple enough?

Photobomb With Domo To Win a Prize Pack