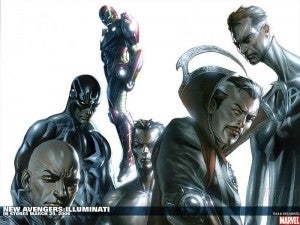 It seems like ages ago, but it was really just two weeks ago that a blockbuster report came out of Latino Review that an Incredible Hulk movie was on the horizon for Marvel Phase Three.

Not just any Hulk movie, mind you: Planet Hulk, which the site claimed would build to a World War Hulk-style melee in Avengers 3.

In the weeks since, Marvel has refused to acknowledge the rumors, which doesn't necessarily confirm them but certainly lends the site, which is right more often than not as it pertains to its Marvel scoops, a sense of credibility.

It also, considering the importance of Marvel's Illuminati to the story of Planet Hulk, begs the question: If the Planet Hulk movies are true, do they confirm rumors that ComicBook.com reported on a few days before--specifically that 20th Century Fox, Sony and Disney are working together to assemble a Marvel Cinematic Universe that can coexist as one?

The Illuminati, as they appear in the comic books, are:

While Iron Man has already appeared in a number of Marvel Studios movies and is in fact as close with the Hulk as any onscreen character, none of the others have appeared in an official Marvel Cinematic Universe role. Dr. Strange has a Phase Three movie confirmed, while Black Panther and Black Bolt are both rumored to have them in the works, too.  But we're more interested in a couple of other characters.

As indicated above, some of the rights to these characters belong to Fox, and so they would have to either be worked around, replaced or...in the right scenario...brought in for a cameo.

Sound absurd? Well, remember that Fox's Mark Millar has said in the past that he specifically wants to craft a universe in his X-Men and Fantastic Four films that doesn't contradict the Marvel Cinematic Universe so that fans can view them all as one place if they want to. And certainly it's not as though cameos aren't done pretty regularly in both the Marvel and Fox-Marvel films.

For their part, some folks at Sony have also said they were not only willing to give up their designs for The Amazing Spider-Man's Oscorp Tower to create a unified Marvel New York skyline, but that it was only time and the need to hustle together special effects in time for The Avengers's release that prevented it taking place. That's something they suggested could happen in the future. Will Avengers 2 feature Spider-Man's buildings in its skyline? We'll see.