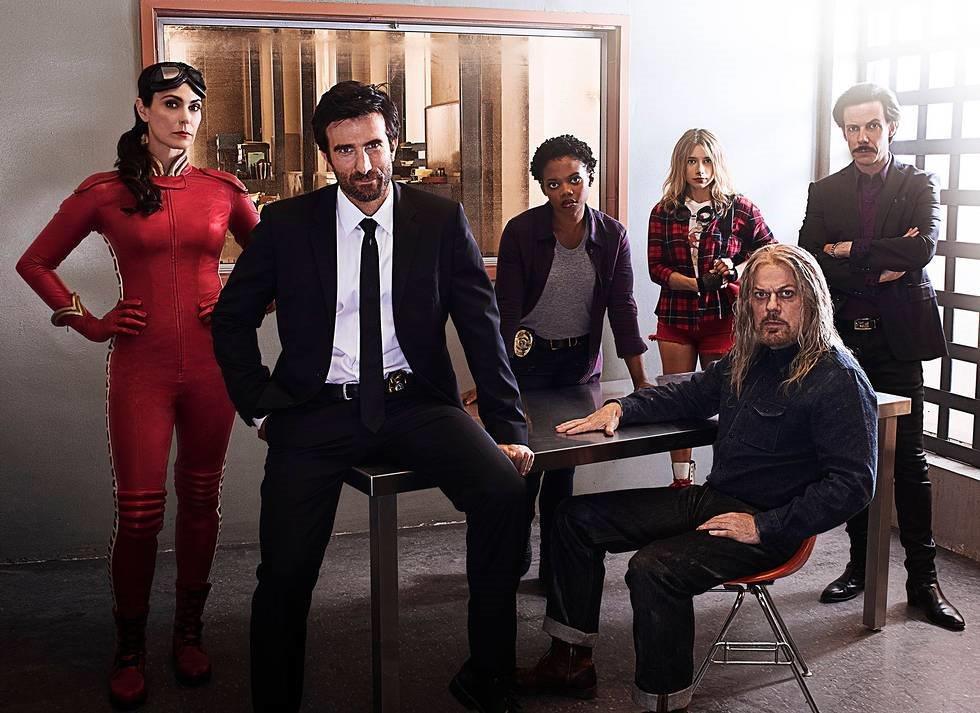 The episode opens in a prison for powers, where a man in a hood and jumpsuit is being escorted through the building. They throw him into a room with Triphammer, who tells him taht he has an offer of clemency. The man's name is Blue Magma, and Triphammer wants him to participate in an experimental trial; he tells Blue Magma to attack him, and when Magma says he doesn't want to be involved in a weapons trial, Triphammer removes his armor and prosthetics.

Magma falmes on and goes after Triphammer, but when Triphammer presses a button, Magma is bathed in a green light and his powers are gone. For a moment, Magma seems happy that it's over, but then his head explodes. Triphammer is angry that he failed, even as the head of Powers Division comes in to talk to him about it.

Triphammer had sold the chief on a power drainer by saying that without getting powers under control, regular humans would be extinct in 50 years.

At a crime scene, Walker identifies Levitation Boy, the kid who had been hanigng out with Zora the night before. He had clearly dropped from the sky at speed, but that's not possible given his powers.

Near the top floor of a nearby building, they find one of the Sway envelopes.

At her new place, Calista is shaving her legs when Royale pops by to see her. She has figured out that he and Simons (his henchman) are an item, and he tells her that she should still be more modest around strangers. She asks if the cops are still looking for her, and he asks where she's going. She asks if she needs permission, and he says no but the police are still looking.

He tells Calista that the superhero identities are overexposed lies, and she'll be hurt if she doesn't realize that.

Walker and Pilgrim head off to PAR, an agency for powers, to see Zora. They show her photos of the dead boy and while her agents are freaking out, her powers unconsciously erupt. Walker helps her get them back under control, and finally she tells them that she doesn't really know Levitation Boy that well. They tell her that they want her help finding Calista. She gives them something to look up.

Wolf is acting strangely in his cell, so they bring in Triphammer to examine him and give him his next head trauma. They leave him there with the blade in his eye and Wolf kneels there, repeatedly hitting his head to knock it out.

Calista goes to see Retro Girl, telling her that Royale is trying to build something. She wants her powers, and nobody takes her seriously. Calista tells Retro Girl about how her mom used to have a Retro Girl tattoo and that she would flash it when she was protecting Calista from her abusive father as a kid.

At the morgue, Dr. Death confirms that Levitation Boy was taking Sway.

At his home, Crispin is chatting online with Chaotic Chick, the girl he met in the powers video game. She, too, lost a family member to a power. They decide they want to make a statement.

Triphammer is telling the chief of Powers Division about Wolf's apparent progress; he wants to test the drainer on Wolf.

At Retro Girl's, she tells Calista that she's under her protection, and asks her to come with her.

Using the phrase Zora gave them, they find a video of Levitation Boy's death, which leads them to a wannabe who posted the video online. He tells them about Sway but says he doesn't know the source beyond that they got it at Here and Gone.

They take the rest of the kid's stash and send him away, then decide to go to the club and try to see Royale dealing.

At the Shaft, the next trail with the electric-powered baddie from last week works out; Triphammer has figured out how to take powers away.

At the club, Retro Girl takes Calista  to see "how power really works" while Walker and Pilgrim are staking the place out.

Walker sees Calista and get supset that Retro Girl was lying to him; he and Pilgrim decide they'll take advantage of the distraction she provides to get into the club. They break in through the back and head inside. Crispin is outside, and the bouncer lets him in.

Inside, Retro Girl is walking through the club, and Royale decides he wants a private chat. Walker and Pilgrim keep looking for Calista and Walker sees that the kids are taking Sway. Royale pops in front of Calista and asks her what she's doing with Retro Girl. She tells him that she's friends with Retro Girl and can help keep her out of Royale's way.

Walker and Piilgrim decide to circle the building and try to get Calista out before somebody doses her with Sway.  Calista, seeing one of the cops, grabs Crispin and starts making out with him to create a distraction. He heads to the bathroom and, once he sees it's empty, blocks the door. He spraypaints something on the mirror. It's the "Chaotic Chic" logo.

Walker is looking around for Calista when he's distracted by Retro Girl.

Pilgrim grabs Calista and has a brief confrontation with a couple of the more popular powers, but Walker defuses it.

Retro Girl tells Royale that she plans to trash his club in the press and put him out of business. As everyone tries to exit, it's a three-way tug-of-war between Royale, Retro Girl and Powers Division for who will keep Calista. Ultimately she sides with Royale, but then cries when she gets "home."

Royale tells Calista about how he first discovered his powers by teleporting away from his abusive father. He wanted to go back for his little sister, but he didn't know how his powers worked. He teleports Calista to the club, where she can hide. Crispin sees her and asks her how to get out of there. The two leave together. Royale then teleports to where Wolf is, as Wolf is tearing guards apart at the Shaft. Covered in blood and naked, Wolf tells Johnny that he wants to go home, and Royale nods.