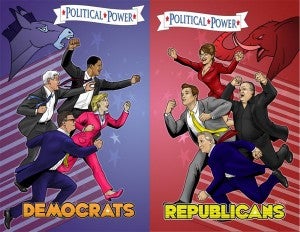 There will also be a companion graphic novel featuring left-wing politicians. Political Power: Democrats, which will also be known as The Blue Book, will feature the biographies of Hillary Clinton, President Barack Obama, Senator Al Franken and the late Ted Kennedy. The Blue Book is scheduled for release in September 2011.

According to Bluewater Productions, the covers of The Red Book and The Blue Book will pay homage to a Super Friends comic book cover from the seventies. When the two books are placed together, the covers will show the biography subjects running toward each other. Both covers are illustrated by Joe Phillips.

The Political Power: Democrats and Political Power: Republicans graphic novels will retail for $15.99 each, and they will be sold wherever books are sold, as well as in online venues like Amazon.com.