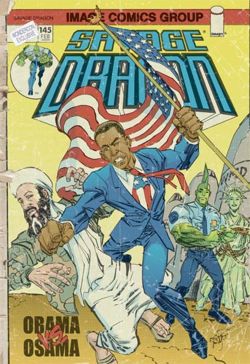 The first couple of times that Barack Obama popped up in comic books he was fairly conservative. He received an endorsement from the Savage Dragon during the election, and he hung out with everyone's friendly neighborhood Spider-Man at his inauguration. Now, that Barack Obama is actually President and occupying the White House his comic book appearances have gotten a little more risqu . No longer is comic book Barack Obama content to sit on the sidelines and let the superheroes take care of business. No, comic book Barack Obama wants a piece of the action himself. On a WonderCon comic book convention variant cover for Savage Dragon #145, President Barack Obama is shown socking it to Osama Bin Laden. The cover is a retro-cover calling back to the days when comic book characters like Captain America would punch Hitler. Of course, havin 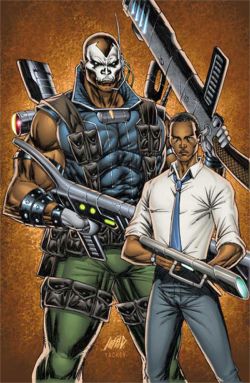 g President Barack Obama punch Osama Bin Laden really isn't that out of character. I mean, what American President wouldn't deck Bin Laden if given the opportunity? Perhaps, even more shocking is that an Emerald City comic book convention variant cover for Youngblood #8 shows President Barack Obama holding a gun. Considering that President Obama is widely regarded as being anti-gun, it's surprising to see him packing heat in a comic book. Maybe it's ok, because it appears to be a souped-up laser gun as opposed to a real gun like people in small town America cling to. What's next for President Barack Obama in comic books? How long before he gets a superpower or he's revealed to be a mutant? It's only a matter of time before President Obama gets doused in gamma rays or pops out some adamantium claws.