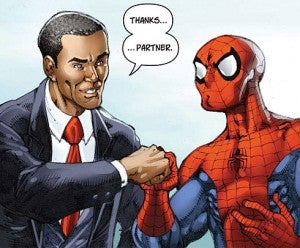 What is it with U.S. politicians making comic book references in their election efforts this year? At a fundraiser held last night at the home of musician Gwen Stefani, First Lady Michelle Obama evoked a familiar image while discussing her husband's ongoing re-election campaign. Before an audience composed largely of parents of young children, Michelle Obama said:

"All right, this is among the coolest things I do. I've gotten to hang out with the queen, a couple of queens and kings and princes and dukes and whatever, but this — this is cool. So obviously I'm thrilled to be here with all of you today. And I want to thank Gwen, in particular, for being so kind and gracious and hosting us all here at her beautiful home. And I've said this before, and I'll say it again:  Barack can't do it alone.  He's not Spider-man.  He's not a superhero; he's a human.  So he needs your help."

Really? Spider-Man? Couldn't she at least trot out a Superman reference on behalf of Warner Brothers executive Barry Meyer, at whose fundraiser she would be a guest of honor later in the night? Man, the DC movies really do get no respect.

President Obama "Is Not Spider-Man"