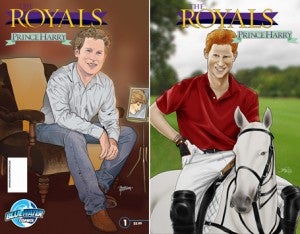 In the 'what in the world are they thinking department,' Bluewater Productions, creator of the successful biography comic book series, is publishing not one--but TWO--books on Prince Harry. Both a comic book and a graphic novel entitled "The Royals: Prince Harry" hit shelves in mid-August.

Really? Prince Harry? Short of the folks that buy tabloids, I doubt that many Americans could pick the guy out of a lineup. But maybe that's the audience Bluewater is targeting, as the framework seems to surround Harry's 'upbringing with his mother Princess Di and his father Prince Charles, to his wild partying and his military experience.'

I. Just. Don't. Get. It. But according to writer CW Cooke, I should. "As Americans, we are fascinated by the British royals. They fit within our construct of a celebrity-fueled popular culture. But more than that they represent an air of pomp and history that we just don't have."

In case you're one of the 40 folks that wants to buy something on Prince Harry, here are the details: "The Royals: Prince Harry" comic book is 32 pages and the graphic novel version is 40 pages. Both are written by Cooke and illustrated by Justin Currie and hit shelves mid-August.

Stitch Crashes Disney's The Little Mermaid in New May Release