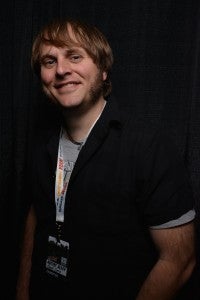 There aren't many men who can say that they pull the strings that make a criminal mastermind dance--although comic books tends to be full of men like that.

One such writer is Daniel Corey, who takes on the legendary villain Professor James Moriarty in his Image Comics series Moriarty. An ongoing series of miniseries based on the model established by comics like Hellboy, Corey's stories answer the question of what a great villain would be like if the hero who gave him definition were stripped from him.

The title, currently available in a pair of softcover collected editions, will soon be released in a hardcover that combines the two.

He joined us on the last day of New York Comic Con to discuss the series, when we can expect to see more and what's going on with the musical adaptation.

How was New York Comic Con this year?

It's been great. This is so very well-attended; artist's alley is just flooded with people and a lot of new readers to be found. We've had a good, constant stream of traffic all weekend and moved a lot of books, talked to a lot of readers and--no complaints.

With a smaller book, how do you pitch to people who don't know you?

And then of course there's "Hey, you guys are Sherlock fans, right? I can tell," usually if they're wearing Doctor Who costumes or something. Or they're wearing a blue scarf--I catch those guys and say, "Hey, I write a book about your nemesis." It's not that hard--just give them the basic storyline of our book and a lot of people get hooked in and pick it up.

It's been a while since your last issue--how hard is it keeping the readership engaged when you're out there trying to talk to people about a book that's not currently in print?

Well, I have new projects in development right now. I've got a couple of things at different stages that will go or won't go, so I just can't talk about them in case they don't go--but I have other things coming. I've got more plans for Moriarty. It's just a matter of, we're going with the series of miniseries model right now. Hopefully in 2013 we can talk a little more and I can tell you more about what's coming up.

Is that comics stuff or other-media stuff, or...

A little of everything, but definitely new comic stuff. And for folks who don't know, we've got two volumes of Moriarty out right now.

I just talked to Mike Mignola about that series-of-miniseries model this morning. I told him a lot of guys cite Hellboy as the seed for that model.

That's what I always say, yeah.

So what's next for Moriarty himself? How goes the Moriartical--the Moriarty musical?

The Moriarty stage musical is in development and trust me, that kind of thing takes a long time but it's still in development. There will be more news once we're actually workshopping it. Right now we're still creating the material and we actually have a script. We have a working script and we're just working on the music. Ray Schnurr is the composer and he's working on the songs.

Are you writing the music with him or are you giving him dramatic context and then going over it?

I help out with the lyrics. I'm a musician, too, I write songs--but he's the REAL pro. So he carries the heavy weight on that. We collaborate some, and I contribute, but it's really, really his thing--the music. He collaborates with me--he contributed to the story a little bit, too, so it's really pretty 50/50 on music and story for the two of us.

With Elementary being on TV now, what do you see? Is it easier or is it harder to talk to people about Sherlock? Will this eventually hit capacity?

It's still expanding. I'm still finding people that are saying, "I just watched that BBC show and I loved it," and I'm constantly finding new readers that are picking up the book and liking it. Yeah, it doesn't seem to be going away. I think Sherlock might be the new Elvis--he'll be around forever in some capacity or another but right now is a real heyday for him.