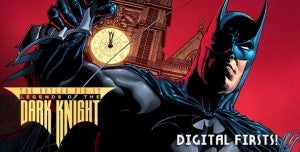 Mild spoilers ahead for

Batman: Legends of the Dark Knight #1, although I'd assume that you already figured out this fairly thin plot fifteen seconds after its central "mystery" is proposed. It is, after all, right there in the chapter title.

In the first issue of DC's new volume of Legends of the Dark Knight, Batman is taken down the rabbit hole a bit, and the ride is bumpy for all involved.

We'll start with the positive which, honestly, is artist Jeff Lemire. Ever since he took over Superboy shortly before the DC relaunch last year, the Essex County and Sweet Tooth creator has seemed to do no wrong; his work on Animal Man and Frankenstein: Agent of S.H.A.D.E. has been fantastic while his creator-owned material is picking up momentum as a result of his mainstream success.

But unless you've been reading Sweet Tooth regularly, you haven't seen a ton of Lemire's artwork which, in its shaky, ragged style, is perfect for this story. His Batman--particularly being a Batman who's still dressed in the gray and blue tights, rather than the movie-friendly armor he's outfitted with these days--seems perfectly imperfect, a testament to what Lindelof and Lemire were trying to do with this chapter.

Legends of the Dark Knight, you should remember, is an apocypha book. There's no sense in wondering how it fits into the already-confusing continuity that DC has crafted for Bruce Wayne in the world of the New 52, where he's one of the only superheroes who's been around for more than five years. The goal here is for high-profile or talented creators to spin a web and see where their version of Batman takes them.

It's that key element that keeps this book from being a failure, in my estimation, as Alfred is reinvented as some kind of psychotic drill sergeant, so fixated on winning a bet with his beloved charge that he will arrange to have Batman first psychologically and then physically traumatized to prove a point. It's a story that's not entirely out of character--but only because Alfred's character has been so often reinvented. I'm transported back to last year, when many fans speculated that part of the New 52 relaunch would include The Outsider being integrated into Alfred's history.

The story might be appealing to many fans, especially those who don't really understand what makes Batman tick but love the movies or that one dog-eared copy of The Dark Knight Returns they have sitting at home from an English course they took in college. It's written for that audience--for the ones who read that Dark Knight Returns and think not about the subtext or the political commentary but, "Oh! He beat Superman! That's awesome!"

This is the Batman of Frank Miller and Tim Burton, tortured and hateful and a bit too arrogant for my taste. And Alfred apparently divines a challenge in all of that and responds to Batman thusly, making for a book where neither of your heroes are very heroic and neither of your protagonists are particularly sympathetic. It's awkward reading, and not in the good way, where you feel you're being challenged and forced to confront what makes you uncomfotable. It's awkward because you know something's wrong, but you can't put your finger on it.

But at least the pictures are pretty.

Batman: Legends of the Dark Knight #1 is available on ComiXology, and its first four chapters will be collected into a print comic at the end of the month. Damon Lindelof's Prometheus opens in theaters today.