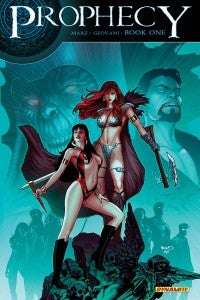 Dynamite Entertainment's sold-out event comic Prophecy #1 hit the stands on Wednesday and while our interview with Ron Marz will be live later today, we wanted to take a little time out to actually read and evaluate the book first. He'll be glad that we did. Marz is a well-known fan of John Carter of Mars, having written about the film for Comic Book Resources when it was in theaters and discussed it at length on Twitter. It fits, then, that the massive, multi-hero team-up book he's writing takes advantage of a number of hundred-plus-years-old characters like Dorian Gray or Sherlock Holmes. It also works nicely because Holmes and Watson become the de facto entry point for the reader and, for those of us who aren't as well-versed in Dynamite's licensed properties as we'd like to be, they're some of the easiest characters to "get," given that they're arguably the best-known crimefighting duo in the entire Western canon. When a murder at a museum is tied to an artifact that depicts the Mayan calendar and its supposed 2012 doomsday prophecy, the characters are off to the races. Time travel is introduced almost immediately, in a way that allows Ancient Mayans to interact with Red Sonja, to interact with Holmes and so on. We also get some sweet action sequences featuring Red Sonja, reminding fans that few people in comics write women in action roles better than Ron Marz. A dagger serves as the artifact that shunts the characters through the timestream, and while the connection would seem somewhat random under ordinary circumstances, I choose to interpret that as a connection to Dan Jurgens' and Chuck Dixon's simliar arc in Booster Gold from a few years ago. Why? Because in addition to the characters who would actually appear in this story, Ron Marz and artist Walter Geovani managed to hide a number of in-jokes in the timestream, including but not limited to characters (like Indiana Jones) who can't possibly appear in the series. The hodgepodge of activity in the timestream gives the sense that anything can happen in this book and any character might just pop in for a cameo. The story soon takes on that same feeling, spinning from a Red Sonja story into a full-on crossover event almost immediately and introducing (in addition to Holmes, Watson and Red Sonja) both Vampirella and Dracula by the end of the book en route to actually putting the band together soon. Geovani's pencils are strong, even if they have a bit of a traditional feel that makes this story feel a little older and less flashy than the Marvel and DC events it's competing with for shelf space this summer. His fundamentals are sounder than most of those guys, though, and his page layouts are spot-on. Marz manages to take  a number of characters who, by virtue of the kinds of stories told with them and the era of their creation don't really "fit" together and make the whole thing work. So far it's just setting the stage, but it's a fascinating stage with a number of interesting characters on it, and I'll look forward to seeing where this story goes.