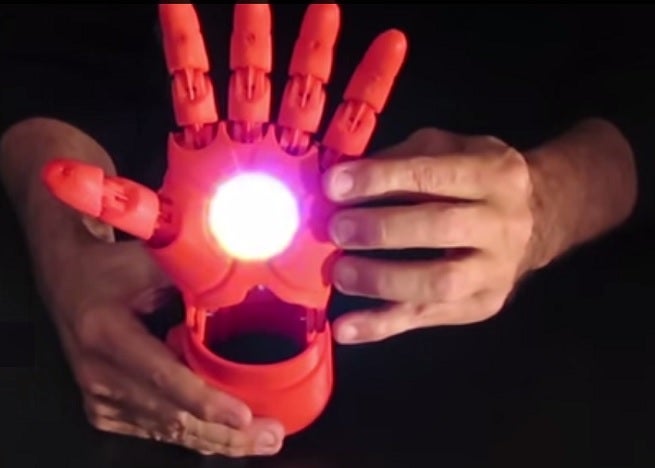 The idea was to create a functional, cool, inexpensive prosthetic hand that cut down on visible mechanics or strings to reduce distraction. In this way, Starace says, you can keep kids' self-esteem up.

The prosthesis is 3D-printed, and clips open at the wrist to fit over a child’s arm. There's also an electronics module, and the hinged "shield" at the top, which hides Iron Man's weapons, can house a number of accessories and devices for everyday life as well. According to the video embedded below, it can hold micro-controllers, a variety of wireless devices, smart watches, sensors, accelerometers, NFC technology and more.

Moving the wrist activates the fingers, tilting the wrist down closes the hand and flexing the wrist up opens the fingers. There is also a voice-activated LED light capability that illuminates the palm of the hands to simulate the look of Iron Man's repulsor technology and provide the user with a built-in flashlight.

The prototype isn’t ready for real world applications just yet -- but Starace wants to give the prototype to a child for free and find a partnership to bring the device to market, theoretically after negotiations with Disney, since Iron Man is their intellectual property and there are a number of toy gauntlets on the market already.