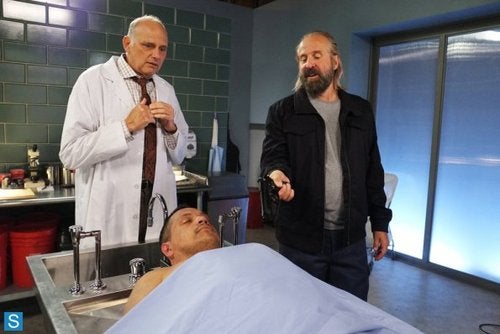 The episode opens on Shawn and Gus sitting at the Psych Office and debating whether or not to call it a night, since there's been no business since Trout took over. Shawn suggests staging a fake crime scene to get hired solving it; the pair spend a few minutes going back and forth on just what that crime could be. Once they're out of ideas, Shawn suggests that the "positive energy" they put out into the universe doing that will result in them getting a case. Elsewhere in town, a man is dragging a beaten body when he sets off a motion-detector light and panics, running off. At the morgue, Woody is about to start the autopsy when the same man pulls a gun on him in the hope of stealing the body. It's not long before the whole police department has been told there's a hostage situation in the coroner's office. 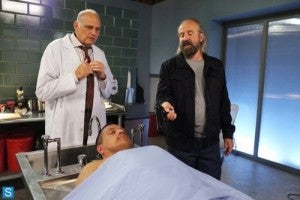 The man tells Woody that he won't hurt him but he can't let him do an autopsy, as he's been set up and the evidence will point to him. The man says he discovered the body in his living room, stabbed with one of his knives. Outside, Trout is trying to set up the station to deal with the hostage crisis when Shawn and Gus arrive.  They want to get on the case, but Trout wants them removed. Trout also sends Lassiter down the hall toward the morgue to get him out of the way. The gunman is taping Woody's wrists with medical tape, telling him that he knew the victim: they were in jail together, had a fight, and that the gunman threatened to kill the man. Trout calls the phone in the morgue to talk to the gunman, whose name is Cyrus. He tells Trout that he was set up for a murder; Trout tells him that he'll put his best detectives on it, then he hangs up. Back in Woody's office, Cyrus says he doesn't trust the police, and Woody tells Cyrus that he might have an idea to get him out of the situation. 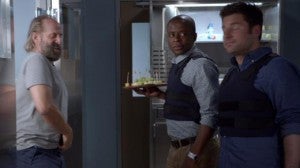 Outside, Shawn and Gus are trying to figure out how to help Woody and get in on the case. They opt for dressing up as a pair of crazy people, and are thrown in a cell for their trouble. In the office, Trout calls Cyrus. Cyrus says he won't talk to him--that he'll only talk to Shawn and Gus, and even then only if they bring food. Trout summons Shawn and Gus out of their cells. Gus is eating the food when they show up looking to talk to Cyrus. Cyrus runs down the situation--that he crossed paths with the victim at a halfway house, where he believes someone else killed the victim and set him up. He tells them that he has a wife and something to live for, so they have to help him. Just then, Juliet brings Cyrus's wife and his parole agent into the office. Trout is looking for a strategy to make this an action movie and put a bullet in Cyrus. He calls Shawn and Gus into his office, asks them what they saw and then dismisses them. He sends Lassiter down there with Woody's antidepressants in the hope of getting in the room, but it doesn't work. When they get there, Woody opens one of the containers and puts it on the counter; it has a camera inside that Trout is using to position shooters. 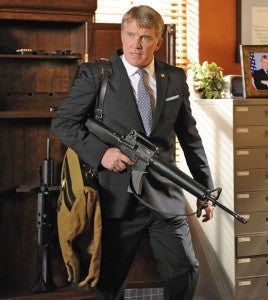 At the halfway house, Shawn and Gus arrive and are met at the door by a man who is watching the facility while the manager is away. He takes Shawn's shoes, as Shawn is pretending to be a criminal in need of a room. Shawn goes looking for evidence that the victim was having a beef with anyone else who might be the killer besides Cyrus, especially Rocco, the man who was watching the building. They discover that the victim was sleeping with Cyrus's wife, confront her about it, and she tells them that the victim was coming in and out at all hours. They note that there's a 9 p.m. curfew and go back to talk to Maurice, who runs the halfway house, only to find him there, murdered. Back at the headquarters, Trout is preparing to storm the morgue when Juliet goes to warn Lassiter Trout is unhinged. A similar hostage situation Trout had managed in another city ended with four casualties after he did almost nothing to mitigate it. Lassiter lets Juliet in, where she's pretending to be Woody's daughter. She's inside trying to figure out how to get Woody out, but Trout tells Lassiter that his plan hasn't changed and he's about to move in. At the halfway house, Shawn and Gus find lottery tickets that prove someone has been violating the terms of the halfway house. 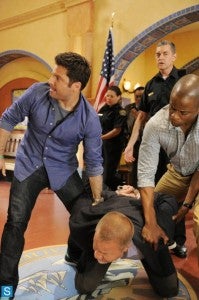 Back in the morgue, Woody and Juliet convice Cyrus to let them start the autopsy to try and find evidence that helps direct suspicion to someone else. Just as Cyrus figures out that Juliet is a cop and is ready to shoot her, Woody finds sulfiric acid in the wounds, and tells him that it's a good indicator the victim wasn't killed at home. They figure out that the victim was hanging "no trespassing" signs miles away from  the halfway house--that they're making fertilizer there, a process that needs sulfiric acid. They find the crime scene where the first victim was killed. Shawn, figuring out who it was that killed him, calls Lassiter to tell him that the culprit is in the station--it's the parole officer. Lassiter goes to take him into custody as the rest of the officers are ready to storm the morgue.Juliet gets a text telling her who the killer is. She stands between Trout and Cyrus and talks them down. The victim, it turns out, had wanted to go clean after relapsing into bad habits in order to win over Cyrus's wife, with whom he was having an affair. The parole officer, though, was taking a cut of the ill-gotten gains and couldn't take the risk of everyone going public after they were out of business together, so he killed the criminal and the halfway house proprietor. Lassiter arrests him, but before anyone else can come upstairs to find him taking the man into custody, Shawn and Gus tackle him and make it appear they were the ones who caught him. After it's all done, Trout tells everyone they suck, and that Lassiter and Juliet are fired. The phone rings, and it's Internal Affairs, who got him fired over his tactics during the raid.

Psych Recap With Spoilers: Someone's Got a Woody