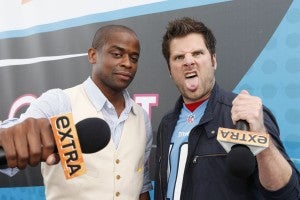 Psych, the long-running cult hit that pits a fake psychic against real murderers (not The Mentalist, the other one--the one that goes to Comic-Con) will return for at least one more season past the one that's about to begin, USA Network Senior Vice President of Research Ted Linhart announced late Wednesday via Twitter.

As the show ages, each subsequent year is speculated to be its last, but this announcement comes before season seven, which begins in February, even begins.

Only the renewal itself was announced, nothing else, with formal details expected to come later today.

This seems like a good time to look back at the interview we did with series star James Roday about the 2010 Twin Peaks tribute episode of Psych, no?