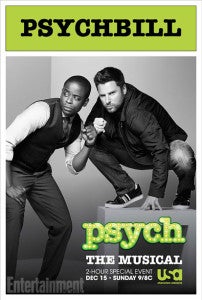 James Roday and Dule Hill, stars of the hit USA Network dramedy Psych, took to YouTube today to record a special holiday message for fans of the show, reminding them to tune in tonight at 9 p.m. for Psych The Musical.

The double-sized episode, which will be available on DVD on Tuesday, clocks in at nearly 90 minutes even without the ads and is a bit of a stand-alone episode. Taking up what would have been two seventh season episodes on the schedule, the show will air tonight--months after Season Seven has ended and a month before Season Eight is set to debut.

This episode--like the Twin Peaks-themed episode, "Dual Spires," has been one that the cast and crew have been wanting to make since the show began and the fact that it is being treated as an event in its own right shows the level of commitment that USA has given to the veteran series, which is expected to end at the end in 2014.

"It is a love letter to the fans and to music and [series creator Steve Franks's] legacy and I think it's worth gobbling up," series star James Roday said in a recent interview promoting the episode.