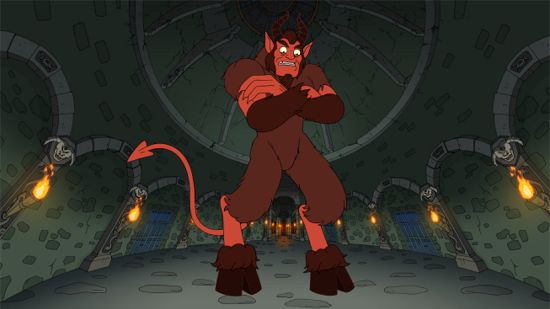 Out of sensitivity to the Connecticut shootings, Fox pulled new episodes of American Dad and Family Guy for this Sunday. While the network did not reveal why the episodes had been pulled, we got a glimpse at some of the footage from the pulled “Minstrel Krampus” episode of American Dad, which might explain the reason.

The episode focused on a demon called Krampus, who punishes naughty children on Christmas. In one segment, Stan and Francine are in a toy store with their son Steve, who starts grabbing a whole bunch of toys. Stan says, “What’s gotten into this boy. He’s insane.” Then, Steve breaks into a song about how he’s a bad, bad boy. The lyrics start off, “I’m the one they call a mystery. I’m the one they call insane. Ain’t no other way I’m meant to be.”

Steve is joined by four boy backup singers. At one point, Steve and the boy backup singers appear holding toy guns, which they use to fire Nerf darts at Stan and Francine. While we’re not certain if this is the scene that got the episode pulled, the idea of a boy singing about being insane then shooting his parents (albeit with a toy gun) could very well be content that Fox would want to avoid airing at this time.