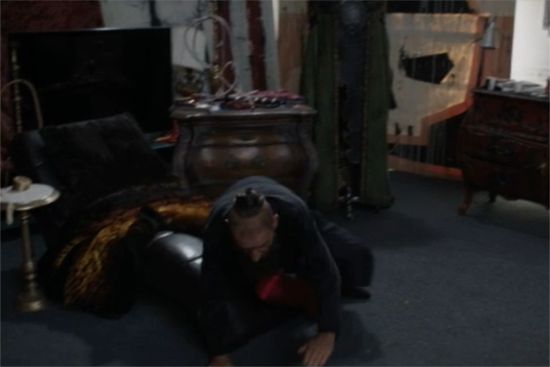 Back when the first images from Iron Man 3 were being released online, there was a little bit of chatter about a skull logo in the film potentially being an Easter Egg for The Punisher. Now, that Iron Man 3 is out on DVD & Blu-Ray, the theory has taken on new life after a viewer posted a screen capture of a skull logo in Iron Man 3 to Reddit. The red, white, and black skull logo can partially be seen hanging on a banner in the background of a scene involving Ben Kingsley's character. The skull logo does bear a striking resemblance to The Punisher logo, so some have interpreted this Easter Egg as a hint that Marvel Studios is planning a new Punisher movie. However, it's very possible that this skull logo was intended just to be a generic skull logo, as part of the background that was being created for The Mandarin. In addition to the wall banner, a skull logo can also be partially seen on a robe that The Mandarin is wearing in an advance photo that was released for the film. Then again, The Mandarin had a Captain America tattoo, so it wouldn't be outside the realm of possibility that he might utilize a symbol for The Punisher as well as part of his game. While the mere presence of a possible Easter Egg is no guarantee of Marvel Studios future movie plans, there has been some question over who currently has the rights to The Punisher. In an exclusive interview with Comicbook.com last year, Gale Anne Hurd, who was a producer on two Punisher movies, gave us an answer on that particular question. Hurd said, "Marvel has the rights back, and since it's a fan favorite, I imagine at some point this fantastic character will be back, either on the big screen or on television." So while the skull logo in Iron Man 3 may or may not be an Easter Egg for The Punisher, Marvel Studios does have the rights backs so there would be nothing stopping them if they so desire to make another Punisher movie.