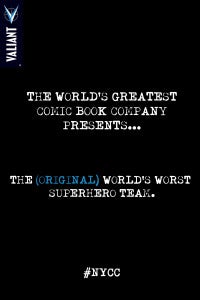 Valiant Entertainment have issued a visual press release teasing "The (original) world's worst superhero team," likely a suggestion that we could see new material coming out of Quantum & Woody creators Christopher Priest and M.D. Bright in 2014. An announcement of whatever this posters is teasing is expected at New York Comic Con's "Must Read Valiant" panel Saturday at 4 p.m.

Quantum & Woody has been one of the most unqualified success stories of Valiant's relaunch, in spite of some pretty significant obstacles, including fans unhappy that Priest and Bright weren't involved with the new version. In spite of skepticism from fans and creators alike, James Asmus has managed to garner critical acclaim with the series.

At the same time, reports around the time of last year's New York Comic Con suggested that Priest and Bright had some fully written and drawn work that had never seen print, but would be released by the new Valiant. That turned out not to be true, although our sources told us some previously-unreleased work from the duo was out there.

Could this new teaser--very similar to least year's tease of a Quantum & Woody announcement except for the word "original"--suggest a release for those stories? New stories from the duo? A new collection of the classic material? Something entirely different? A goat? We'll see on Saturday.

Quantum & Woody by Priest and Bright To Be Announced at New York Comic Con?