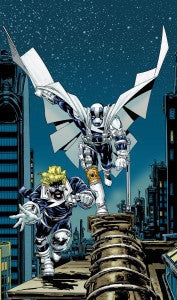 Today at New York Comic Com's Valiant Comics panel, the publisher announced that Christopher Priest and M.D. Bright, the acclaimed creators of Quantum and Woody, will reunite for Q2: The Return of Quantum and Woody – an all-new, five-issue mini-series set wholly in the original continuity of Priest and Bright's groundbreaking Acclaim Comics series.

The new miniseries, which marks the return of both creators to monthly comics, will pick up in the modern day, launching an older Quantum and Woody into an all-new adventure set twenty years after the events of their original series.

“Soon as Doc and I started hashing out the plotline, we got into a huge argument," said Priest. "It was just like old times. Happy to be back on the goat.”

"It's enormously exciting to have Priest and Doc return to the iconic characters they made famous," said Valiant Executive Editor Warren Simons. "Over the years, the legend of the original series has only grown, and they're about to unleash a fearless new chapter in the lives of Quantum and Woody."

Here's the premise, as laid out by a press release from Valiant:

Whatever happened to the world's worst superhero team? Twenty years past their prime, the unlikely crime-fighting duo known as Quantum and Woody have long since parted ways and retired…until a middle-aged Quantum suddenly reappears with a brand-new teenage partner—and his wisecracking ex-best friend gets mad. Now Woody is out to break up the all-new, all-different Quantum and Woody and put an end to Quantum's recklessness and child endangerment…just as Quantum sets out to bring down a shadowy, globe-spanning agency of freelance spies and assassins. As Quantum's plan crumbles right through Woody's fingers, will the former friends set aside their differences…and their age…and their numerous health difficulties…to join forces one last time without driving each other crazy?