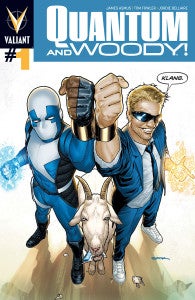 Last month, James Asmus did what seemed like the impossible: He relaunched Quantum & Woody, Valiant's beloved series from Christopher Priest and M.D. Bright, and he did so to acclaim and high sales, with very few people objecting to the fact that Priest and Bright weren't there. That's partly because the book was beautifully done and cleverly written, and arguably at least in part because all of the complaining and cautions about the series had already been expressed in the three-month lead-up between when the first issue was solicited and when it was released. Today, the second issue hits and it will see what our heroes do once they actually have powers. And, yes, it sets us on the path to find the goat. Asmus joined ComicBook.com for a conversation about the first issue, the future of the series and why some things take time to develop. ComicBook.com: Was it a bit crazy doing Comic Con last month in support of a book that is only a month old? James Asmus: Certainly in a sense. It is interesting because I would really love to never spoil anything as a writer. I want the stories to unfold the way I imagined them. So with just one issue I can talk about what happened in the one issue, I can vaguely allude to where we're going and then I can talk about other stuff or the previous incarnation of Quantum & Woody. It's a tightrope act. ComicBook.com: This book came in with a mountain of expectations and baggage-- Asmus: [Laughs] Yes. ComicBook.com: It feels like they offset that a little bit with things like the webcomic. They did a good job of setting you up for success. Asmus: They really did. I've continually been impressed by everything Valiant is doing in their approach to everything, not the least of which was--I think the webcomics were a brilliant way to give people just a little taste of...well, obviously it's not really the book but it sort of gives you a sense of the spirit of it and hopefully we were able to at least deliver a kind of free sample that gives people a little bit more context. It's certainly a book more fans have heard about than have read or have any real familiarity with, so I think it was nice to get something out there that helps define it at least a little bit further in people's minds. 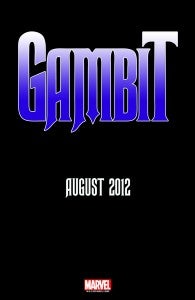 ComicBook.com: Don't take this the wrong way or anything, but I feel like Gambit could have used a little bit of that. Asmus: [Laughs] Oh, I take no offense from that. I actually agree with you. Unfortunately the nature of how the actual business of comics works--people have to decide ahead of time if they want a book or not. Fans in general, and I'm this way, too, are hesitant to jump on something with issue four. So it's kind of like you either have to know you want to jump on the train befor eit leaves the station or it's a lot harder to get on. I feel like Gambit was one of those books where we were making something that was a little more fun and broadly appealing and welcoming than I think people expected. ComicBook.com: Well, I feel like the number of people who had enthusiasm for it before it came was about seven, and then once it hit, it started to build some steam and a reputation. Asmus: That was a weird, tricky thing about the business. I did my first creator-owned earlier this year and it was a very similar thing where orders were modest up front, and especially because the book was really humor-driven. And then we just got great reviews and we didn't shed any readers, but shops ordered less so then we were just hearing from people who couldn't find it and again, it's this weird quirk of how the industry runs. Now, that's why it's great to have digital and if you really just want a story, you can get it--it's never sold out. But I get wanting to have the book. ComicBook.com: It's funny--when we spoke with Robert Venditti, he told us that he tried to bring a sense of context to the book--that in the first issue of the original run, you open the book and X-O Manowar was already on the run from the aliens. Quantum & Woody was kind of similar in that today's #2 is pretty much starting at the same point as the original #1. 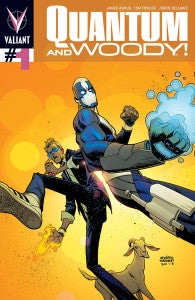 Asmus: Yeah--It's funny; I kept sort of saying to them as I was writing, "Is it really okay that they're not Quantum & Woody in the first issue?" And a few places have lightly poo-poohed it but to me, the old series was always about their relationship more than it was about superheroics and I really wanted to put a firm foundation down where they are a pair of guys constantly making bad decisions in hopefully a hilarious way. I really just wanted to set a really solid foundation for why they care about each other. As a writer, I'm a firm believer that we need to know why the characters care about anything for us to care about anything so I really wanted to take the time and put that in there, along with all the craziness. It was important to me to get the other stuff in. We have infinite number of issues, theoretically, to do all that stuff so hopefully you see enough madcap comic book-style action in the first one but it definitely blows out in issue two. We deliver on all that business in a real big way. ComicBook.com: The thing that struck me was not that there was no Quantum and Woody, but that there was no goat! Asmus: So--yes. I think it's especially funny when someone pointed out that of the four [variant] covers for issue one, they all had the goat on them. One of them had only the goat on them. I guess you could say Quantum and Woody are in the title. In the original series, the goat didn't come in until issue three or issue four but quickly became such a defining element of the book. I still think it's a really brilliant element to give people a sense of what kind of book it is. When you say "One of the main characters is a goat," it gets you a lot closer to understanding it in a fast way. So yeah--that was another thing where I didn't want to rush it. I know it's something people are really excited for but for me, hopefully that will on the cynical side keep some people who are on the fence around until the goat shows up. I'm very forthcoming about issue four--the goat makes his presence known in a really big way. We at least jump right into the deep end once he's there. ComicBook.com: How have you dealt with the blow-back from fans and pros about Priest and Bright? Nobody's going after the other titles! 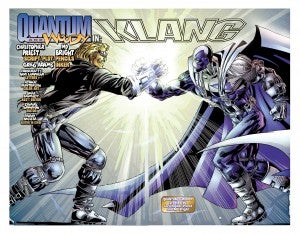 Asmus: You know, that's an interesting question and it's definitely something I certainly had to think about and make peace with ahead of time. I think it's twofold. Some of the other series had more fortunate timing and so they ran long enough where they had more hands on the property than Quantum & Woody did in 20-some issues that kept their creators on board. Christopher Priest has spoken publicly about the fact that that probably wouldn't have been the case if the book kept running, one or the other would have subbed out at some point. The other part being it was enough of a fourth wall-breaking, seemingly confessional kind of personal style to the feeling of the book that honestly we at least feel like we get to know something about Christopher Priest in the reading. It does feel like a different animal and it is sort of a strange thing to walk in and go, "It had only been done by this one person and now I'm going to do it." There's certainly other characters in superhero-dom where that was the case and they happened to be only written by someone. Fantomex was created and only written by Grant Morrison, then somebody else had to write it. Howard the Duck. ComicBook.com: You did get lucky, though; there's been concern and some grumbling, but nobody went the full-on Before Watchmen on you. Asmus: Yes! And I was very appreciative of that. I think actually that's a wonderful testament to the fact that Valiant fans are really wonderful and they want good material and they want people to care about it as much as they do. I think their only fear was that maybe these characters can't feel right by other people. I'm a fan of the original and it would be a mistake for me to just imitate it but I feel like I understand what has to be there for it to be true--for it to be Quantum & Woody--and then I just have to find little ways to make it as personal as Christopher Priest did in his.