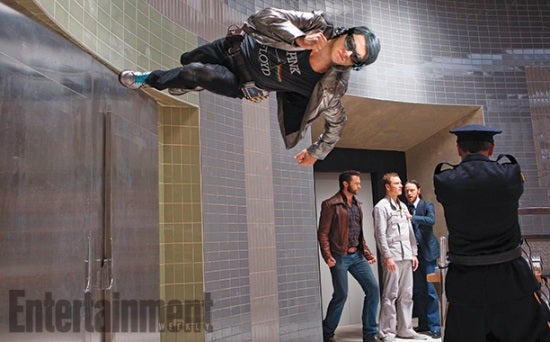 All of a sudden, we're living in the golden age of live-action super-speed characters.

We'll leave The Flash aside for now, since TV is a different game and the DC Universe is somewhat different from the Marvel one. That said, numerous reliable sources say the pilot is terrific. Speed, apparently, is in.

Ever since the first teaser photo of X-Men: Days of Future Past's Quicksilver popped up online, Evan Peters's version of the character -- who will also appear in next year's Avengers: Age of Ultron, portrayed by Aaron Taylor-Johnson -- has been the subject of ridicule. 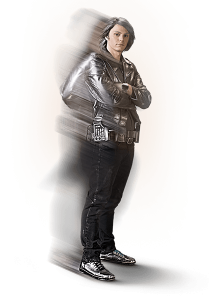 He looked strange and goofy, was the consensus almost immediately, and there was an attendant sense that Fox and the X-Men franchise would be hard-pressed to outperform Joss Whedon and the Avengers in a head-to-head competition, so it seemed strange to announce Quicksilver as a member of the cast after Whedon had already expressed interest in bringing Quicksilver and Scarlet Witch into Age of Ultron.

Having seen the film, though, suddenly it seems like Avengers: Age of Ultron has a little something to live up to.

Singer's decision to use special filming techniques to shoot Quicksilver paid off, and the experience -- especially in 3-D, is not only trippy but hugely entertaining. Actor Evan Peters -- who ironically starred in Kick-Ass alongside Age of Ultron's Quicksilver Aaron Taylor-Johnson -- nails the part and seemingly has a blast during the high-speed section of the film. That will leave Marvel with a decision as to how to handle Quicksilver and whether making him a bit dour (which runs contrary to the tone of most of Marvel's work) is a better way to separate their version of the character not just from Fox's version but also The CW's Flash.

In Captain America: The Winter Soldier, fans got a quick look at Quicksilver and his twin sister Scarlet Witch, who doesn't appear in X-Men: Days of Future Past but is rumored to play a role in X-Men: Apocalypse. The idea, the rumor went, was to beat Fox to the screen since the two studios share the rights and neither could stop the other from using it. Whoever "got there first," the logic seemed to be, could make the other look like an imitator -- and anyway, how impressive could X-Men really be when Singer was open about using the character more or less just for one particular action sequence?

Pretty memorable, as it turns out, and frankly the appearance in Captain America was neat but unlikely to leave much of an impression on anyone except the film's dedicated fan base, who already knew who Quicksilver and Scarlet Witch are. Peters owned the role and was one of the best bits of a very good movie, leaving a question on some fans' mind: how does Marvel go about doing it better?

While fans have generally thought Avengers-Quicksilver looks better than X-Men-Quicksilver, it's also worth noting that both Quicksilver and Scarlet Witch -- at least from what we've seen so far -- feel a little like mutants from an X-Men film. Their costumes are understated to say the least, with Wanda Maximoff looking more like Anima from DC Comics's Bloodlines event and Quicksilver looking like that guy from Godzilla in an expensive track suit. That somewhat generic look works for Hawkeye and Black Widow but may count against Quicksilver, who cannot reference his parentage (in the comics, he's the son of Magneto) in the Marvel Studios movies and so, when combined with the costume, stands the risk of feeling like much of what makes him special and different from any number of other super-characters out there.

Obviously this isn't to say that Marvel, Joss Whedon and Aaron Taylor-Johnson don't have something cool and exciting up their sleeve, or that they need to take notes from the X-Men franchise. What it does mean, though, is that for months fans have been assuming Bryan Singer's version of Quicksilver would be an embarrassment, setting the stage for Marvel to really blow people away with Joss Whedon's interpretation of the character. Now that X-Men: Days of Future Past has made the character an instant fan favorite, the question becomes whether Marvel can still exceed expectations when they're so much higher than anyone expected them to be.

And, if not, what do do about it. Obviously Whedon has plenty of time before the film hits, but during that time X-Men will hit video and The Flash will hit TV. It may be that the golden age of super speedsters on screen is a bit more challenging for the current champion of superhero movies than any of us expected.

Quicksilver, An X-Men: Days of Future Past Standout, Puts Pressure on Avengers: Age of Ultron