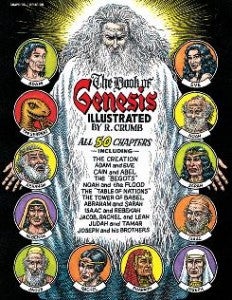 . It's a book that has been printed countless times in dozens of languages and with the occasional twist or nuance (aka the recent Green Bible) to inspire a modern audience. It is probably safe to say however that The Bible has probably never looked like this! Today marks the release of R. (Robert) Crumb's illustrated take on one of the most well-known parts of The Bible, the book of "Genesis". Officially titled The Book of Genesis: Illustrated by R. Crumb, the 224 page tome will depict in vivid, Crumb-style detail each story, action and character involved in "Genesis", from the story of Abraham to the destruction of Sodom and Gomorrah. "If people of faith say that what I've done is blasphemous or profane, I'd shrug my shoulders and say 'I just illustrated what is there," said Crumb to USA Today. Crumb's words come on the heels of high anticipation for the project, rooted in Crumb's noted artistic style that tends to pay careful attention to detail and spares no expense when it comes to vivid depiction. Every act from "Genesis" is illustrated here, and according to Crumb, he had a certain epiphany while working on this project, "To take this as a sacred text, or the word of God, or something to live by, is kind of crazy. So much of it makes no sense. To think of all the fighting that's gone on over this book, it just became to me a colossal absurdity." Crumb used the King James version of The Bible and a 2004 translation of The Five Books of Moses to begin his undertaking, and he spent hours researching ancient cultures, translations and various Sumerian myths as he took on this task. Crumb has even said that the book is simply a "straight illustration job", reiterating that he simply drew what was stated. The book retails for $24.95 and should be available at most retailers. To read more with Crumb, check out the rest of the story here.