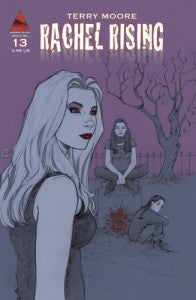 The last new issue of Rachel Rising (one of our ten best ongoing series of the year) for 2012 hit the stands a week ago today, and series writer Terry Moore, as always, joined us to discuss the strange goings-on in the little town of Manson.

Next year is a big one for Moore, whose inaugural comic book series Strangers in Paradise turns 20 and who will reissue that series, as well as bringing some of those characters to Manson for a visit at some point. So listen up and, if you're behind, remember that both physical and digital copies of the first two Rachel Rising trade paperbacks--The Shadow of Death and Fear No Malus--are available for sale already.

As always, this is a spoiler-filled discussion. Go buy the comic and read along with us!

And excuse the fact that this month's commentary jumps around the issue a bit; this was a busy issue!

So the good country doctor...it's kind of hard to believe he's on the up and up when he's recommending flat-out rape of one of our protagonists, isn't it?

Yes. Not something you would expect from him, is it?

It does seem that you've got more planned for Jet, though, in spite of being momentarily soulless.

Assuming she lives that long, will Rachel's body eventually heal? In early issues she had vital signs, they were just very, very slow and low.

Yeah, it’s weird, isn’t it? I’m curious to find out what is causing their stubborn life force and how it works. How they heal would have everything to do with what’s keeping them up in the first place.

Now that the mystery is solved for her, is it kind of onto a new phase in her life? The way she talks to the cat--"This is the new normal, you'll have to deal with it"--seems remarkably well-adjusted compared to some of the denial we've seen from her at times.

Being buried a 2nd time, with all the remains of the other women from 300 years ago… it changes a person, you know? You can’t come up the 2nd time a baffled prom queen—you must have some clue that there is a pattern to this and here you are, yet again. Plus, something about the dead speaks to Rachel. Informs her.

Of course, her reaction to the roach isn't exactly enlightened and empowered...!

Because that’s just gross. Who wants roaches crawling around inside their stomach?

There is something settling about Earl not even considering the ideas being thrown at him here; the way he was hovering over Jet at one point in a previous issue, that moral line was somewhat less clear.

The ugliest person in town has the most beautiful interior and moral code. Now what do you do with a person like that?

Is it difficult trying to convey the state that Jet is in--that not-dead look that Earl refers to?

I just have to be aware of what I’m trying to show. I know what dead looks like and it doesn't look anything like someone sleeping. You have to know it to draw it.

While generally Doc seems pretty harmless, it's definitely a moment of squick when he offers to take Jet home, considering his wife and all.

There's quite a bit of exploration of history and myth in this book. Is there something larger and more thematic in the discussion about how, one day, these characters we're reading about in a story will all be characters in a story? Or is that reading too much into it?

No, you’re right. In the years to come, everything we do now will be just a story then. When enough time passes, the stories of our lives will lose all personal connections and we will be just as mythical and unreal seeming as historical figures. Someday you and George Washington will have the same physical relevance. The story of your life may sound like a fairy tale to children. It’s something to ponder on a cold night by the fire.

This is, of course, a pretty major issue for the character of our Dr. Siemen. While the apparently-immortal women we've seen so far are trading off bodies over the years, it doesn't appear that's the case here. Is that skin condition a sign of something more nefarious, or just a way of identifying the character?

Siemen’s is here for different reasons. The first clue to that and his skin condition are in this issue.

Is this security guard just a really deep sleeper or is there something more at play? These ladies are CHATTY.

They put him out to do their will in his office. He’s not the security guard, he’s the city water manager.